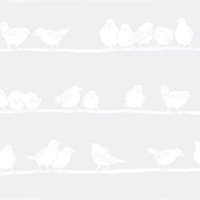 Whether you're looking for some privacy for an overlooked window or would just like to add some decoration to plain glass, d-c-fix static film offers a wide range of designs in varying sizes, to fit any area of glass. Application is so quick and easy, you'll be amazed. The film adheres to the glass using water, which later dries out leaving a flawless finish with no air bubbles. The static window films are reusable and can be removed easily without leaving residue. The premium range offers a higher grade material with a more authentic glass look, whilst the thicker gauge film makes application even easier.

I wish I had bought this ages ago

I got this window film for the bathroom window ,it was very easy to cut and fit.Now I don’t need to bother with curtains .

Waste of a tenner.

Very pretty but will not stay on my window. A total waste of money. No instructions either.

Great product but look up instructions

I'm really happy with the film - looks great now it's on the window, but it took a bit of putting up as doesn't come with instructions. Worth laying flat under a mattress or heavy surface for a day or two to flatten it out if it's been tightly rolled up in the store for a while.
It definitely has a backing film, once you peel this off (use a fingernail, or stick a piece of masking tape to each side then pull them apart) it's a lot thinner so should sit flat on the window and is nicely opaque to give some privacy, and i really like the birds design.

Only problem is the lack of instructions. Don't think I'm allowed to reference other websites or this review won't get published, but have a search online, there are plenty of instructions to put this up, including from the manufacturer of the film.

doesn't cling to the windows. just fell off. waste of money

Bought two packs of this to use on our 12-pane bathroom window. Read reviews re backing and peeled this off, wiped window with soapy water and used a squeegee to apply. Corners and sides would not adhere. Seems to us a real issue that the film is supplied rolled the 'opposite' way, so the edges want to curl outwards. Have rolled the second roll the other way and weighted; hoping this will solve the problem.