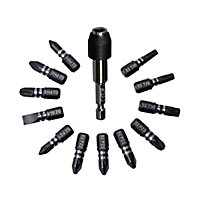 These Erbauer mixed impact bits are made from steel (s2 grade).

Bubbled up - 3 months ago

Quality is poor these break as soon as you use them

I bought these to use with an 18V impact driver. The PZ2 broke into several pieces first time out after driving around thirty 5x80mm screws into some 4x2, a fairly basic job. Assumed it was a bad bit, but the same thing happened with the second one. Hard to believe this is advertised as impact rated. Not impressed.