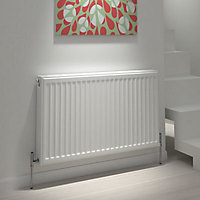 A well made product at a competitive price. Delivery was quick

Good apart from the plastic plugs

Radiator is fine and a good price only problem I found was with the plastic plugs fitted to protect the threads when the radiator was painted were nearly impossible to remove .

I ordered two radiators and they were delivered the next day as promised. unfortunately they were both damaged in exactly the same place, top left hand corner. The cardboard was torn where they had obviously been lifted by the straps, which is not recommended. I complained and two more were sent the next day and they were both ok and are working very well. It took nearly a week for the first two to be collected and when the van came they only had one returns label for two parcels. Phone calls were made by the driver and eventually they did take both damaged radiators away.

I bought this item about a month ago. Having fitted and working kudox radiator before, didnt think any other brand. It works perfect and easy to fit according to my plumber. The package was a bit damaged, but nothing affected inside!

Excellent value for money and free delivery on a very large and heavy item. Expertly wrapped.