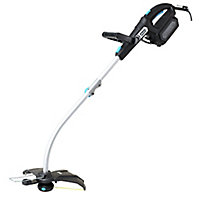 Good for an electric model.

I was looking for a heavier duty electric strimmer because I have a steep sloped front garden that you have to strim you can't mow. The little Bosch one I had gave up after one season and took ages. This has a nice big cut and is very powerful for an electric model, it's halved the time it takes me to cut that bit of the garden. For spare lines I bought a big roll of 2.5mm line sold for petrol strimmers, the construction of this model is more akin to them anyway, just with an electric motor rather than a petrol one. Only criticism is the black cord is harder to see than a yellow or orange one would be and it is heavy, but still lighter than a petrol model. Good if you have a lot of grass to cut that you can't use a mower for. Don't expect precision cutting with this, it's not precise, but it does clear overgrowth quickly and with ease.

5mins before it over heats, strummer cored lasts just as long and have to throw half of it away, because of system, my worse purchase in a long time

Good powerful trimmer. Only dont use it for more than 15 min nonstop as it will not last too long otherwise.

Easy to use and does the job no fuss.Done my very overgrown front garden in ten minutes.Defiantly worth the money.

Far to heavy and cumbersome

Was not easy to get into edges, surprising since that's what it's for. Base is far to big. Hard to get an accurate distance from the ground. Cord is not strong, quite brittle really. Selling on as not new. Back to old faithful flymo.