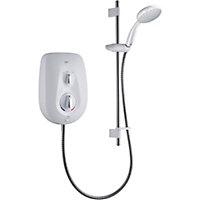 Mira electric showers are guaranteed to last longer and more efficiently. Their build-in heating system takes and passes water from your cold water supply and heats it. With our revolutionary Mira Clearscale™ technology, the build-up of limescale is also reduced.

I bought this product for my house and also my son bought one for his flat. My sons one did not work from the start after being installed by a professional tradesmen. Power getting to it and water getting to the shower but didn’t go on. Contacted b&q they said that they cannot take it back but he must contact Mira to come out. He contacted Mira and they said if it wasn’t a mechanical issue then it would cost £160 call out charge. That’s more than the shower cost itself. My own one worked for 3 months then the pressure relief valve went on it. I did the same and contacted b&q with the same result. I got Mira out and they said that the shower hose must have been bent and stopped the water getting through the hose so it wasn’t their fault and would have to buy a new heaters tank at £120. To say that I was unimpressed was an understatement. Decided to go with a triton shower like I had before as it was really reliable. Do not buy this product and seriously think about using Mira before you use them

Does what it says on the box

We have had the shower about a month ago works well and the power is good. Excellent value for money would recommend

Poor product from a doubting supplier.

Bought one which worked for two weeks after plumber fitted it. Plumber came back and said shower unit had burned out. Had a huge wrangle with supplier and manufacturer both saying it was plumbers fault. Mira sent an engineer eventually on a deal that said their fault they will replace, plumbers fault I pay for engineers trip.
Mira replaced the shower. Fourteen months later guess what just happened...........yep! Same fault!
Can't think why they only offer a twelve month guarantee!!

Bought this as a direct replacement for my old Mira shower. But annoyinly the fixings to the wall are in different places and the shower case doe'nt cover all of the new holes so you are left with at least a couple of holes in your tiles to fill. The shower itself is fine does'nt seem that powerful but possible our water pressure is maybe a little low. Overall though it looks modern and the shower head is adjustable to three positions which is good.

I bought this as a replacement for my old Mira Sprint Shower. No problems, works wonderfully & was delivered quickly. A great buy. Very Happy. Thank you