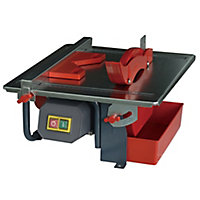 I bought this to help me tile my kitchen and I was apprehensive after reading some of the reviews, but I thought I’d still go for it and I wasn’t disappointed. The tiles were 7.5mm thick and it cut them perfectly. I’d suggest practicing on a few off cuts you don’t need to get used to it and so that you get the finish/cut you want. I’m no expert but I would fully recommend to anyone.

Leave on the shelf

Total waste of money, moves all over the place while cutting, rips tiles rather than cuts, guide rail was put in the bin after 5 minutes, didn't feel safe using it, this product in my opinion should be removed from the shelf, now in a skip where it belongs, beware

This is the third tile cutter I've owned, and although it does the job, it's not the best I've ever used! The product needs some assembly before use, which includes fitting the blade guard and installing the blade. The guard consists of two parts, the main guard and a secondary one. Both guards remained very floppy, and I could not set the main guard at a fixed height- it kept falling down onto the tile, so I couldn't see what I was doing. I ended up removing the second guard, as it just got in the way. The water tank is a separate item, and you have to lift the cutter over it when it's filled. This would be impossible if the cutter was fixed to a bench, so the tank would have to be filled from the top- but then how would you clean out the sludge? The fence is rather stiff to move, and you have to secure it by tightening two screws at either end. A quick-release mechanism would have been better! In use the cutter performs ok, and cuts through ceramic tiles at a good rate. It's difficult to see what you're doing though, because the guard keeps falling down, and the top of the tile gets obscured by water containing tile dust. So, it's best to rely on the fence for accuracy. All in all, I'd say this tile saw is adequate, but it would benefit from some method of fixing the blade guard at a fixed height. The fence setting mechanism could also be improved. But it will cut your tiles, which is what it's supposed to do.

Bought this in a rush to replace my old tile cutter , and now wish I hadn’t. It struggled to cut through a decent wall tile , with in sufficient power it came to a stop 3 times .
Rough cut , and a pain to set up properly .
Please please avoid this tile cutter .

Great for the price.

Ok, after seeing product reviews on another site I decided to get one. They were not in stock but B&Q did. I read the reviews here and began to despair. After translating the instructions I was ready to go. The first tile, water everywhere, the cutting was a bit juddery and not great, too much glaze missing. However, filling the water to just above the minimum it splashed a little but nothing like before and totally acceptable. The tile cut was much better. By the third tile the cut was very good and was like cutting through cheese. By the final cut, it was super, hardly any glaze split and the water level had not really dropped. It cuts angle for sockets brilliantly. Very quiet too. Remember, let the blade do the cutting, you do not need to apply any pressure at all. As for fixing to a worktop, I didn't and didn't need to, the blade did all the work. I loved it and now look forward to finishing the rest of the kitchen. Remember, it "grinds", not cuts.