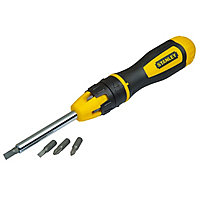 Broke after a short time.

The ratchet mechanism broke after a few uses. By ‘broke’ I mean it came loose on the shaft and the internal mechanism tinkled out into the table. this is a very poorly made item.

I guess the old one was better

Having heard lots of praise for Stanley ratchet screwdrivers in the past I bought one of these whilst in store thinking it would make an ideal Christmas gift. However, since realising this is a newer revamped design which gets nowhere near as much praise, I decided I might as well crack it open and give it an honest assessment instead. Firstly, you get quite a lot for your money with various bits, sockets and a wall mountable holder too. There are three Robertson bits included but not a single Pozi bit, which makes no sense in the UK market and I presume it must have been designed for Canada. Bear in mind that probably the single most commonly used bit (PZ2) isn't included. The slots in the handle seem to be a major gripe, with lots of reviewers stating that they can't get the bits out. Personally I had no problem with this and can get them in and out without issue. The storage cap on the end of the handle seems like a good idea in principle but after it worked itself loose the first few times I used the screwdriver, I'd rather glue it firmly shut and lose the extra storage. The ratchet mechanism seems okay (so far) and overall the handle has a sort of mid range DIY grade plasticky feel to it. More of a kitchen drawer tool rather than something for professional use. In summary, I don't think I'd give one as a gift but for occasional use I'll hopefully find it useful to keep on hand.

I bought this specifically for the square head bit. The bit chewed up on the first use, don’t know what the bits are made from but it isn’t any use, very surprising for Stanley tools. I would have returned it but I binned the receipt.

Awful product. I bought this because I had the earlier version which I lost. This was very badly made. You could not get the bits out without using another screwdriver to prise them out. It felt very light and cheap to use. The ratchet mechanism fell to bits within a few uses. The old one I had for years and was robust. They really cut corners making this one. Would definitely not recommend this.