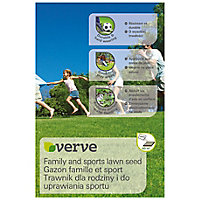 This lawn seed is ideal for play areas and reduces surface water flooding. For an even spread, simply sow by hand or by spreader. On average, it has a total coverage of 60m².

Brilliant seed. But I did chuck a whole box on a 4x5m section. Really thick and was able to give it a trim after just 3 weeks. The pic is after

Covered the patches on two occasions, first day I scarified and planted the seed alongside the addition of topsoil, 3 days later covered the rest, it came to about a week later and I saw nothing but a few days after shoots started appearing, a week on and it’s thick and dense, the grass was watered daily, so I guess it’s a game of patience and perseverance, thank you B&Q!

Re seeded my lawn with this grade of grass seed. After 10 days shoots began to appear and now 6 weeks in all appears well. This was done with the verve lawn grass spreader which worked really well. Kept well watered as per instructions and looking forward to first mow in about 4 weeks time

I am thinking of buying grass seed but I want to know what varieties are in there. Rust fungus resistance is very high priority so I am looking for a mix that is heavy on double lolium esquire perennial ryegrass. If you don't tell us what the mix contains this page is as good as useless.

Does what it says on the tin

Bought about a month ago sprinkled over the area that needed to be re-grassed, and has grown very nicely, already an inch or two in height, obviously helped by the weather, and the fact that we have very good soil. But it's nice to have the grass grow so quickly.
No fault found!