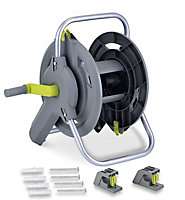 This Verve Hose reel is durable, weatherproof and is ideal for watering small or medium size gardens.

The assembly is easy (I am not a handy person at all) but I just dont understand how to connect my old hose with the reel. I will email the customer service to see if they can help me.

Assembled slightly wrong (totally my fault, mistakes happen!) however it is impossible to get the thing apart

Easy to assemble and sturdy, does its job. Great value product

For the price, a not too bad hose reel. The winder handle almost feels as though it will snap off in your hand when using it. However that said, it’s robust enough to do the job. Remember to save some hose for the connector between the reel and tap.

I had wanted one of these for some time to replace a damaged (and rusty) Hozelock wall-mounted reel (because you can't get replacement parts due to its age), but they were out of stock due to Covid. Back in stock September 2020 so I bought one.

Easy-to-follow instructions and easy and quick to assemble. Very sturdy once assembled.

Unlike the wheeled Verve Hose Cart (which I also bought and assembled) the assembly is straightforward (the hose cart is a bit of a nightmare to assemble).

I liked the inclusion of two brackets (+ screws and wall-plugs) to fix the hose reel to the wall.

One (slight) negative is that the reel has two clips to secure the end of the hose on the reel. These are a good idea. However, where I have mounted the reel (on a brick column) the clips - which protrude slightly - foul the hose when winding the hose back in. I suspect that on a plain wall, this wouldn't be an issue so I haven't downgraded the overall rating because of this.

I can thoroughly recommend this product and at the price - it is unbeatable.