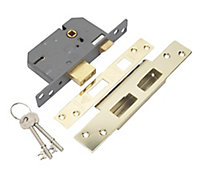 This 5 lever mortice sashlock is ideal for external use with wooden doors. Suitable for use with left hand or right hand opening doors.

The product specifications given by B&Q are very limited. Not enough measurements to make a purchase.
Case size? Backset? Height? Depth?

Bought the lock a few weeks ago. Relatively easy to install

Bit fiddly to install as didn't line up with old unit

Not as on web site

The lock was not the same as in the picture on the website. The dimensions needed to check the size are not specified. Not sure how you are supposed to get a replacement lock.

Bought as a replacement for a different make. The holes for the door handle and keys match but the width of the lock was different requiring some work. More importantly, the holes for the screws were in slightly different positions. This meant that the facing plate was difficult to line up and either the bolt or the latch would rub on the facing plate. Less than half a millimetre extra clearance around either would have solved the problem.
So, if you are doing it from scratch it is probably a good buy but as a replacement, especially if the original was fitted by a professional (i.e. bodged), then probably not the best idea.