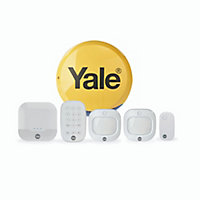 I read many negative reviews of this exact product online and was quite apprehensive. I still bought two units (one for my house and one for my mum's) thinking I can return them if they are not very good. Admittedly I am quite a technical person and generally do well with these kind of things, but I still followed the instructions carefully. It has been 3 months now since I have installed 2 systems in 2 houses and both have functioned flawlessly. This proves that if correctly installed the system is a great system. Mine has not given me a single false alarm, and it has successfully triggered every single time I have tested it from different doors and systems. Furthermore remotely setting the alarm or deactivating it has worked 100% of the time from anwyere in the world.

Easy to install once you read the instructions beforehand. Mess free due to no wires. App works well. Have no builds other than the keypad is a little small so you have to be accurate when using this. Mainly use the phone app to arm/disarm though

Fickle system, would not recommend

In theory, this should be a great product, but it has not worked well for me. Both the Yale app and Customer support are limited and poor.

First piece of advice I'd give to anyone buying this kit is to test it immediately after installation for any teething errors. I admit, I made a mistake here.

I bought this set ahead of a rare and necessary trip away from home, at a time when I knew there was a burglar targeting buildings on our street.
Setting up the Smart Hub and kit was reasonably straightforward, though the instructions are a bit basic.
After arming the system and leaving the house, and having driven the first hour of a three hour journey, my phone buzzed to tell me that the alarm was sounding (disturbing neighbours at 11pm...). Apparently the external siren had decided that it was being tampered with. Drove one hour home to find no break in, no evidence of tampering, the unit had simply malfunctioned within an hour of being armed for the first time.
Got the stepladder out, unscrewed the unit, tried pressing and unpressing the anti-tamper button, either way the "smart" hub was convinced that it was being tampered with and would sound the alarm as soon as I re-armed the system.
This effectively meant I had no alarm system, and I felt I could not resume my journey as my home was unprotected.
After much effort looking for support (Yale customer support don't answer the phone during the pandemic) I found a forum post in some dark corner of Yale's website stating that it's possible to override the tamper alarm if you dig deep enough in the Yale app system settings. Did that, and the system seemed to work fine for the duration of my trip, although the siren is now vulnerable to tampering due to the override.

Cut to a few weeks later and I had to unplug the "smart" hub and WiFi router while doing some DIY. After plugging the "smart" hub back in, it did not work, and it never has since. It shows up as "offline" on the Yale app. Yale customer service suggested a few fixes but have not been able to help me get it working again.

Bottom line - it's a fickle system with a customer support team who don't really know how it works. I would suggest to others to explore other home security options.