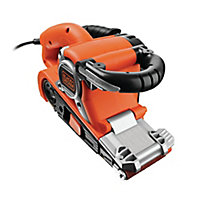 The Black & Decker 720W corded belt sander is ideal for sanding large surface areas such as floors and tables.

I chose this sander because I have a number of Black and Decker tools which have given me good service and they are reasonably priced. I did not experience the problems of the belt not running true or being unable to centre it correctly as reported by others. The belt does get very hot so will expand slightly and require some centre adjustment during use but if you pay attention to this then it runs without problem. I sanded down my bathroom floor in about an hour which was better going than I had anticipated. It would have been 5 stars except for the fact that it is very noisy and I had to wear ear defenders. Also, the vacuum exhaust adapter split but this is easily repaired with some gaffer tape.

When I got the unit home I was unhappy with the build, the rear plastic housing was rubbing up against the rear rubber belt drive, making the belt difficult to fit. For the first 20 minutes of attempting to get it to work the driver wheel would not turn despite the motor running. For some reason unknown to ourselves the unit started to work after 10 minutes of fiddling, but he belt kept running off to the side despite using the adjustment setting, and the main driver roller appeared to have shifted on its mount. I decided this was next to useless and took it back to the store.

This sander is very unpleasant to use and has distinct flaws. The centre of gravity is very far back, which makes it liable to tip onto the rear roller and damage the work piece. The tracking is useless, causing the belt to wander so much that it can either sand it's own casing or overhang the base plate by several mm, both while set on the same adjustment. I've tried to use this on a floor to replace budget sander I had been using and basically it's not a patch on the sander that cost half the money. I'll be returning this for a different model as I don't believe it's fit for purpose.

Fell apart in less than 1 hour.

Using this for sanding decking. 30 mins in and the drive wheel fell off.
Quality is not as good as it used to be now that these are no longer made in the UK.

I bought one and it worked okay for a while but as another reviewer said, the tracking has gone - out of guarantee of course! This should be recalled or a free repair done through B&Q