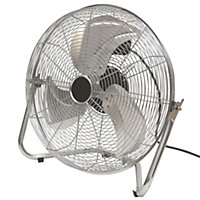 Keep cool with the help of this corded air circulator from Blyss. It comes with 3 speeds for added temperature control and has a manual tilt adjustment.

When this arrived on the box it said high airflow fan, they weren't kidding, the amount of air it moves is massive. I actually bought this to get air moving in a room that contains several computers in an effort to bring the temperature they run at down a bit, it's doing that job admirably, from abour 8 feet away it's lowered the temperature of said computers by between 6 and 11 Celcius which frankly is a lot more than expected.

The construction is good, it's very sturdy and feels like it will last for years, the cage around the metal blades is particularly strong so it does seem like good value too.

Only slight downside is that it's fairly noisy but I really don't care considering how it's performing, overall, very happy.

I use it to keep me cool when I'm riding the indoor cycle trainer and it's perfect. The fan produces a wide flow of air without any dead spots. It's not quiet and I'm not sure I could sleep with it on in the same room as some have suggested.
The slowest setting has more power than a pedestal fan on high speed and I've never tried it on the full speed setting!

A little loud on highest setting but great fan, does the job. We use on Living room which is quite long and it keeps whole area cool

Excellent product so far purchased a couple of weeks ago