We remain open and here to help. Customer and colleague safety remains our priority. Whether shopping in-store or online, we urge you to follow the Government’s social distancing guidelines and to shop responsibly only for what is necessary. 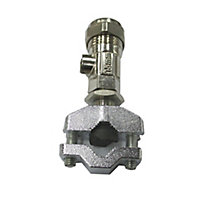 Get a plumber in

The tap is pretty big, which might be an issue if your water pipes run behind the appliance. I had to spend a fair bit of time figuring out where it wouldn't hit the bottom of the washing machine. Cutting the pipe requires some serious turning strength (which makes sense) and I had to resort to gland pliers to get it to turn.
After much turning, I managed to fit it, there was a fair bit of water spraying out of it during fitting and now it's fitted it drips slightly from the valve. So, we've called a plumber out to have a proper (lower profile) tap fitted and this one removed, which has made more work for everyone.

You might get lucky and manage to fit one without it leaking but in the future I'm opting for peace of mind and getting a plumber in the first instance.

bought this recently.it did exactly what was required****