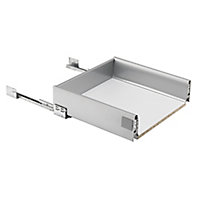 This framed soft close drawer box is constructed from stainless steel, and is Compatible with 500mm cabinets.

I bought this to replace a standard draw that I had installed in my new kitchen because the constant banging and noisy action of my most frequently used draw was irritating. Has a nice quiet action and the soft close is excellent. This was fairly easy to install, but the instructions were not 100% clear. I managed to misread them initially but figured it out after a few minutes.

The base of the draw does not have pre drilled holes for the screws that attach it to the walls of the draw which caused me a bit of bother. You have to make sure that the base stays tightly fitting in place when drilling the holes or you can end up putting them in the wrong place and build the draw mis-shaped. However if you do it wrong there are additional holes that you can use to correct the situation.

A previous reviewer gave this draw 1 star and complained that the drawers did not fit properly and I am certain that this is what caused his problem.

Pre-drilled holes would have made it impossible to build the drawers incorrectly.

We purchased two of these drawer boxes - what a mistake. Terrible quality, difficult to fit with rubbish instructions. Very disappointed and would not recommend at all. They don't close well( and it's not the way they have been fitted!)