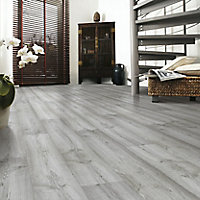 Dartmoor laminate flooring by Eurohome is an attractive grey oak effect plank design with a matt surface finish. Each plank uses a click fitting system, so installation is quick and simple.

Looks great, no rejects and fits together very easily. Easiest flooring I've laid, and I've done a lot over the years.

board has changed, no longer connects flat

I bought 20 packs 6 months ago and it fit together well. I subsequently had flooding damage so the boards swelled and needed replacing. A week ago I bought another 10 packs, same design but the boards have a different composition and connection. The new boards don't sit flat when connected meaning there is a lot of flex when walked on, particularly around the perimeter of the room where there is nothing to hold the board ends down. It is a manufacturing defect to the entire batch which is incredibly frustrating having just relayed the whole floor. Avoid the recently manufactured boards at all costs. FYI It has a matt base, rather than a solid brown gloss base (which was much better).

Husband said it was very easy to lay the flooring. And I love the finished article. Plus it was 20% off so even happier with that.

Lines in between each plank are very dark

I was very impressed by the photo as it appears the planks of laminate blend into each other creating a clean finish. However once laid down the planks create a dark line/border. Clear to see in other people's photos for an explanation of what I mean.
Good product otherwise.