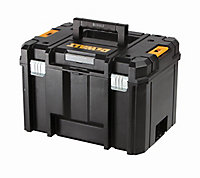 This toolbox is ideal for storing your tools.

I bought one to see how it was .
Once home sorted out my old tool box out and put it all in with no trouble .
I was so impressed
I went back and bought another 5.
I am not a dewalt fan but these boxes are great for storing anything .
Plus the bonus that they are on Black Friday sale .
I went to back today to get some more but sold out everywhere .

Not a bad box

Glad I managed to snap up 4 of them in the Black Friday deals, my non- DeWalt kit fits ok.

Ideal holding power tools especially those that come as bare tools (sold without cases batteries and chargers) or come in cardboard boxes. Sm

Good quality product but expensive for what it is

Bought this to store my DeWalt circular saw in, and because it is also compatible to clip together with my DeWalt screwdriver TSTAK box.

It comes with an included tray, but to be far this is fairly useless if you want to use this box to store large tools in, as the tray wont sit in its holder so the lid doesn't shut without some careful positioning of the tray.

If this box was a couple centimetres higher this would be solved but it is a bit of a gripe as this box is supposed to be designed for storing larger DeWalt tools in, so you would expect the tray to sit correctly with this in mind/ having said that I have manged to fit a DeWalt cordless circular saw, Dewalt Jigsaw and a staple gun in the box now and still have the tray in it - but the tray doesn't sit right only because the circular saws lowest height is too high.