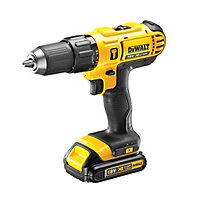 Just bought this and expected to see a battery in the sealed case - apparently not... Might want to make it clear before people waste their time!

Bought this today, drilled 6 holes tried to put in some screws and it died on me. Charger showing full charge but I left it on charge for a few hours but same issues. Will be taking it back to the shop to get another make.

Bought this drill last week and have used it quite a bit for general DIY jobs. Have built a workbench, put together a kids playhouse and put some picture frames up on the walls.

It’s a powerful little drill which is capable of any jobs you’ll need to do around the house. Goes into brick/masonry very easily on the hammer setting, and the drill/screwdriver made it a breeze doing bits of woodwork, which is mainly what I will be using the drill for. Just the 1 small battery is a bit of a drawback if you’re planning on using it for any length of time but I used it to build a workbench from start to finish, using it pretty constantly for 3/4 hours and i still haven’t charged it, so absolutely fine for a DIY’er. Charges quickly anyway so not a problem really. If battery life is an issue then I also have the erbauer brushed tool for the same price which is definitely equally as powerful but has 2 2Ah batteries with it which also have a battery power indicator which this doesn’t. All in all.. a prefect drill for a standard DIY’er though.

I bought this product to start my adventure in DIY, despite no previous experience in drilling I somehow with luck managed to get the flathead attachement into the drill and used it to assemble an ottoman bed, however this was the only attachment I was able to use with the drill I put this down to my lack of experience