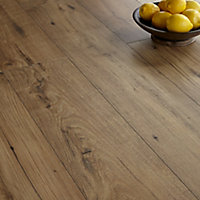 This item is not available at this time.

This laminate flooring has an attractive Chestnut effect finish and embossed surface finish. Each plank uses a simple click system, so installation is simple and it can be used with underfloor heating to keep your home warm.

It looks and feels almost like real wood. Beautiful floor - so easy to keep clean! Laid it in both bedrooms and in love with it - please bring this back in stock b&q!!!

I used this in my kitchen 6 months ago and it looks fantsatic and was easy to fit. we are moving soon to another house and i intend to do lounge in it.

Recently bought this flooring as looks good & price was OK in sale. However, very hard to install as click sytstem method useless.

Great if you have a dog!!

Ok, so I know this review title maybe isnt relevant to a lot of folks who dont have dogs....but I pretty much went for this floor on the basis of other reviews where people specifically mentioned the 'showing up dirt' issue. I have a large dog, who is in and out of the garden all day and honestly, was fed up trying to maintain the look of the previous laminate....which co-incidentally was also a quick step floor. I dont mean that I now ignore muddy prints, BUT, I dont have to get the mop bucket out two or three times a day to deal with simple wet paw prints. This floor is more matte finish than the old one, without looking 'ashy' or 'dusty', and we used the quickstep underlay, and its also noticeably quieter with the dog's nails on it (and in general).
I also really like that there isnt too deep of a groove between lengths or ends of the planks, since it does feel now when I mop it that I am actually lifting the dirt, rather than just pushing it into the crevices.
I'm never quite sure how much to believe other peoples reviews, but, since it was the 'dog factor' in other people's reviews that swung me on this, I thought I ought to say that I'm really glad I went for this for that same reason, and I'm having it continued through to the hall....where both human and dog wet footprints can be an issue.
I'm obviously not saying its a floor than means you never have to clean again....but it has made life a lot easier for me.

Had this flooring put down a couple of weeks ago and I am very impressed. It is beautiful when layed and is the closest laminate I have seen that looks like real wood. I bought this for my hall and what I love is that it never shows up any footprints or marks which is perfect for an entrance hall. I have different laminate in my lounge and I have to clean it twice per day as it shows up everything. Will be replacing my lounge flooring with this as it looks great, looks like real wood and has an expensive feel to it. I got it on sale at £25 per pack which was even better. Highly recommend!!