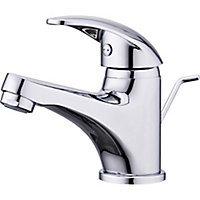 This traditional style chrome single lever basin mixer from the Eidar collection requires no additional purchases. All of our basin mixer taps come with flexible hoses and wastes. This tap is suitable for high and low pressure water systems.

Ok tap for an ok price

would have given 5stars, but on opening box at home, handle immediately fell off, due to missing internal screw. No problem with return, replacement in order. Check before leaving store.
The single lever for the waste was binding on the back of the pedestal on assembly, but easily remedied by bending the lever to fit!

Tap and base do not line up and form a proper seal with basin hole, everytikentou adjust & tighten fixing nuts it moves position b& leaves a hole. The fixing bracket is made of cheap metal and bent after only slight pressure. Pop up waste rod does not fit basin and rubs against side.

As a previous reviewer said, a standard waste fitting won't fit this pop up waste without filing the inside lip. Forewarned, I did this before fitting the waste to the sink. It would be very awkward once installed. The other problem is the connector between the pop up lever and the waste lever, it's useless and just doesn't work. Binned it and used the old one. Such a pity as the tap itself looks quite good. Buy a separate waste fitting!

This product is poor

I am an experienced plumber. I had to fit this Cooke & Lewis tap to a bathroom hand basin, also bought from B&Q. The tap comes with a 'pop-up' plug/waste arrangement but the operating rod/lever cannot be operated because the angle of the rod passing through the tap body is too obtuse causing the rod to foul the wall and the underside of the basin. Apart from that, the sealing ring between the body of the tap and the hand basin is too small to make a seal, causing water on the top surface of the basin to run through the tap hole. I was able to modify the rod by bending it (in a vice) and I added a rubber sealing ring to stop it leaking through the hole in the basin. Also, the drain from the pop-up arrangement was too narrow to take a standard 1&1/4 inch weld plastic outlet pipe, and it had to be forced in, to make a seal. Alo, the handbasin doesn't sit well on the pedestal because it 'falls' from left to right, necessitating the addition of packing, prior to finishing with an unsightly amount of sealant, I would recommend all avaerage DIY ers to steer clear of the tap and the handbasin.