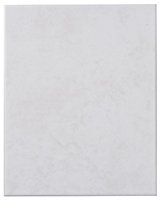 This wall tile is ideal for kitchens, bathrooms & shower walls.

This tile looked perfect for my new bathroom ,nice light grey tile,good price & size exactly what I was looking for ,when the tile arrived I automatically checked that they had sent the correct ones as the colour was totally off, it's a cream with a hint of peach ,there's nothing of a light light grey touch about it!!! Definitely should of read the reviews before purchasing as mainly all the reviews state how off and bad the colour is!! B&Q I think you need to re title this item

the tiles are good value - however !

I purchased 19 packs of these last month for tiling the bathroom. This was going to be my second tiling project with larger format tiles. My initial impression of the tiles was very good. However after putting up about 20 tiles i noticed that some had small chips at the corners and edges. I had to remove these and replace with good tiles. This prompted me to go through all the boxes to check the tiles for defects. At the end I had accumulated 23 tiles with defects from the 19 boxes i.e. a defect rate of 10% or 1.2 tiles per pack. When I took these defective tiles back to B&Q for a refund, they advised they would not normally take back partial boxes. They also told me that the policy (which I was unaware of) regarding tiles was that each pack of tiles should be checked before tiling and if a chipped tile was found, I should take this pack back for a refund. With this in mind, I purchased another 4 boxes. When I examined each box, I found between 1-2 defective tiles which, in accordance with B&Q policy i would have had to return ALL the 4 boxes. I would then purchase 4 new boxes and if the defective rate was consistent, i would have had to return these boxes as well - i hope you can see the ridiculous trend. I decided NOT to do this. I put the 6 defective tiles to one side and may use parts of these instead of cutting a good tile as I go along.
There was another issue that I experienced and which was unexpected. I had measured all the spacers i need to use to ensure these were all 'identical'. However I came across tiles which were not entirely square and where some were marginally longer or wider than that stated dimensions. This had an effect on the gap size which could have become worse if it wasn't managed throughout a run either sideways or upwards.

My final thoughts were what happened to QC at the supplier/manufacturer ?

I purchased 25 boxes to have my bathroom retiled all boxes came from the same batch checked out by store operative and myself. Individually they didn't look too different but after grouting the difference really stood out. After several weeks of communication B and Q refusing to accept responsibility. I am now left with a patchy looking bathroom this has caused a great deal of stress so I would not recommend these tiles to anybody.

I bought these last month,they look good what's been done so far.

Great tiles but much lighter. Not grey...

Overall was very surprised that the tiles were NOT light grey.. even the staff checked the batch number and found it was correct. That said they do look great. I’d say they were like an very light peach...