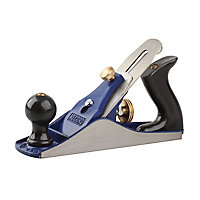 Good budget plane let down by a fatal design flaw

The plane sole was quite a way out of square, so much so that I had to purchase 40 grit sandpaper to lap it with, but you do expect a bit of fettling initially.

I have bought a new Stanley blade for the plane, and will attempt to grind the chip breaker screw down, as I don't see a way of grinding the recess in the frog down. If all goes according to plan, I will straighten the original blade as best I can and add a camber to it and use it as a scrub blade.

This would be a great product (Review is for a Record No5 Jack Plane) but is let down by poor finishing (e.g. moulding marks on plastic handles making them uncomfortable) and even poorer materials. After grinding, sharpening and polishing the blade bevel (it is practically blunt out of the box) I tried to use it only to have the yoke adjuster snap where it butts against the chip breaker. What is even more frustrating (apart from having 9/10 of a working plane) is that I lost the receipt soon after purchase so cannot return it. On a plus note, the plane is not too heavy, has a relatively good range of adjustment and the blade takes a fine edge once you have fettled it. I have rated this as poor for the yoke failure (not good enough with modern materials and manufacturing when I have a 40 yo Stanley No4 plane still going strong) but would otherwise rate as "good" for the price.