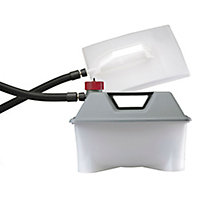 Remove your wallpaper with ease using this corded wallpaper stripper. It's ideal for removing all types of wallpaper and artex. It has anti-discharge and anti-implosion valves.

Good quality wallpaper stripper. Produces enough steam. I am happy about purchasing it.

Does what it says and the tin. love it. ADDED BONUS you can sterilize your seed trays with it, win win.

Was looking forward to getting my daughters bedroom stripped to re decorate! Got this home, followed instructions.. worked for 5 mins and blew the electrics and now won’t work at all.

What a waste of money

Bought this steamer a week ago and was excited to use it. Filled it to the max level, plugged in and minutes later steam was coming out just fine. Minutes later, with the power cable being quite short, I managed to knock it over and as steam stopped coming out, I looked down to see the element glowing a dull orange. I quickly righted the unit but in doing so, tripped the whole house. Now the steamer won't turn on again.

Great product at a bargain price

Purchased this to strip a ceiling and walls to a large bedroom, a lot quicker and less messy than using liquid wallpaper stripper. Great product and really easy to use.