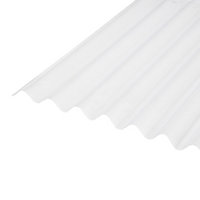 When I picked them up though they were a bit flimsy but once fixed in place no problem. Liable to crack when cutting, used a Stanley knife an took time cutting all ok.

I bought 4 as a cheap roof for a potting shed I put together from some old fence panels. I had to cut them to size and they're so thin I was able to do that with a pair of kitchen scissors. Because they're very thin I used screws and washers to fix them and didn't have any problems. We've had a heatwave, high winds and a couple of all night thunderstorms and torrential rain and so far they've been fine. As far as I can tell they're the same as a competitor is selling for twice the price so a bit of a bargain.

Fitting is little bit tough bcus it might be brake. I hope it last long , let see