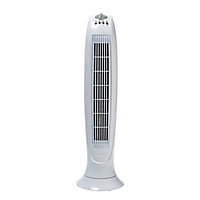 Keep cool with the help of this 3-speed tower fan. This will fit neatly into any corner of the room, and provides a constant, yet comfortable, breeze with its 70 degree oscillation to gently lower the temperature of the air around you.

Round and sound - 4 days ago

No ticking if you don't use timer, couldn't do without this fan, its brilliant

Quiet and relatively powerful. It’s a steal at the price.

Great fan . No ticking what so ever.
Would recommend

It's good but not fantastic

Obviously, you get what you pay for. As this is on the cheaper side, you're not going to get something spectacular. ALthough, we have to remember, this is a FAN not an AIR CONDITIONING UNIT. It's not going to work wonders.

It worked very well when I first got it, 6 months down the line I feel that it has slowed down a bit and it isn't performing as well as it did straight out the box. Again, you get what you pay for.

As for the noise, I don't feel as if it's that noisy. I can run this all night and it doesnt stop me sleeping. I have actually used this fan all year round at various times to send off my youngest to sleep for their day time naps. It's just enough noise to be noticeable but it doesn't really disturb you to be honest.

Even though I have said that it doesn't work wonders and that its performance has decreased since having it, you really do notice a difference in the room in summer when it isnt on.

I would say that this is an average fan, with an average performance. Don't have high expectations, but its not awful.

I was quite happy until switched on oscillation. Very bad vibrating noise all the time.
Returned back.