How to build a raised deck

Create an elevated terrace with decking

A raised deck is a great way to make the most of space that can otherwise go unused, such as slopes and uneven areas. Create a level space for entertaining, eating al fresco, or just sitting out and enjoying the sunshine.

Before you start, head to our guide to planning your decking project for an essential introduction. This covers everything from how many boards you'll need to what design you should arrange them in.

Read How to plan your decking

Our example is of a deck that is:

If you plan to lay a more simple deck on the ground floor, check out our article on laying a basic deck for more information.

Read How to build a basic, ground-level deck

This list includes everything you will need to build a raised deck. Some of the items are necessary for more than one stage of the project, so do check the steps thoroughly for the tools and equipment needed.

To prepare and square the site

To attach a deck to a building

To build the sub-frame and cut deck boards

To add a balustrade

How to prepare a site for raised decking

Before you build the deck, the site needs to be prepared. 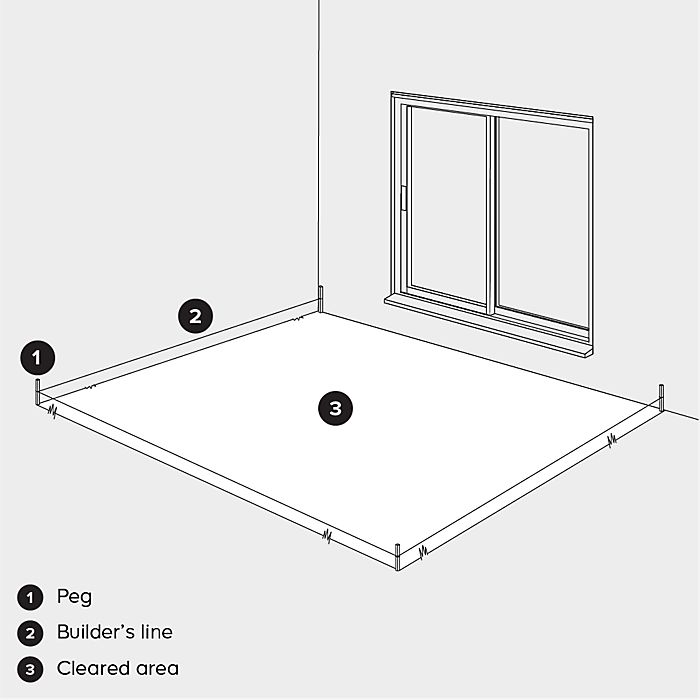 How to square the site

Once the site area has been prepared, it's essential to ensure that the sides of the deck are completely square. This is key as the decking will be laid with joist support posts concreted into position. Once these are installed there's no way to move them if they've been put in the wrong place. It will also ensure that your finished deck will look professional. So a bit of extra time spent now on checking the site can help prevent any unwanted problems later on.

The easiest way to achieve this is by using the 3-4-5 triangle method.

The 3-4-5 triangle method uses simple geometry to create perfect right angles at the corners. For example, a triangle with sides exactly 3, 4 and 5 metres long - a right angle will form at the corner where the shorter sides meet. Any multiples of 3, 4 and 5 will follow the same pattern. 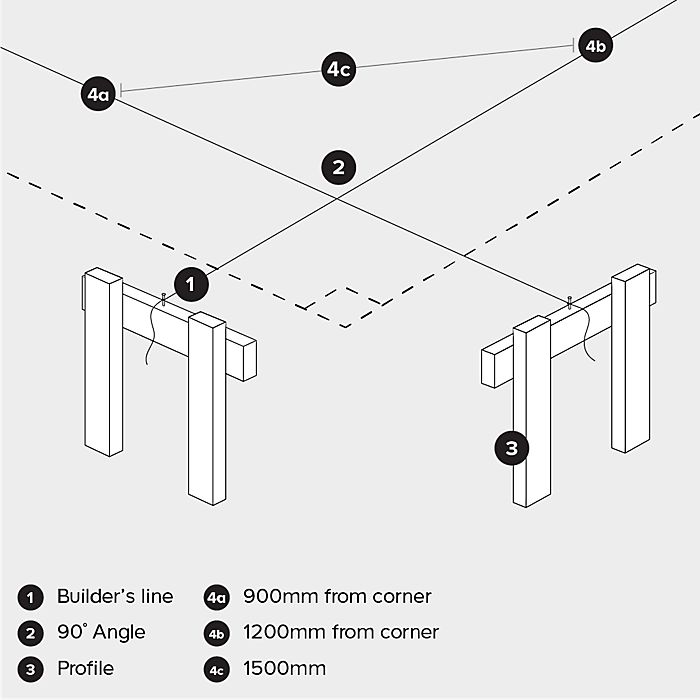 How to attach a deck to a building

This stage involves fixing one joist directly to the wall. You can skip this section if your decking is not being fixed to a wall. The rest of the decking's sub-frame is then aligned with it.

Before starting, check that you won't be blocking off any air bricks or interfering with the damp-proof course (DPC) by attaching the joist.

How to fix joist support posts

As well as posts at the four corners (corner posts), an elevated deck is also raised on joist support posts. The corner posts don’t sit right in the corners of the sub-frame. They are offset by the width of a post to allow deck posts (which will be needed when attaching railings or balustrades) to be slotted in later. A lot of the work at this stage requires two pairs of hands. 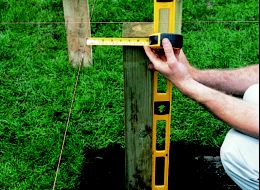 In the corners of the marked area, dig out 700mm deep holes for each of the joist support posts. Ideally the holes need to be about 300mm in diameter at the top and 400mm at the bottom.

The gap between the centre of one post and the centre of the next should be a maximum of 1.8m in any given direction - we recommend 1.5m. The corner posts should not be right in the corners but offset to one side by the width of a post. It doesn't matter which side as long as they're level down each length and flush ready for the outer joists to be fixed later.

Top tip: Bring in a block

For extra stability, place half an aerated block at the base of the hole. Place the post in the hole on top of the block, checking it’s straight using a spirit level. 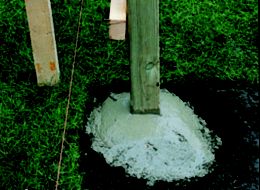 Use pieces of timber, we suggest 19mm x 38mm or similar for a good size. Screw the pieces together to form an L or T shape. Use a panel saw to spike one end of the prop to help secure it into the ground.

Pour quick-drying concrete into the holes and slope the concrete away from the posts.

When all the posts are in place and the concrete is set or hardened off, remove the lines, profiles and wooden props.

Fit a sheet of weed-control fabric around the posts and cover it with gravel.

Allow the concrete to set (as recommended by the instructions) before building the sub-frame.

How to build the joist sub-frame

The sub-frame forms the deck’s outer skeleton. Joists run in the opposite direction to the deck boards, so it's important to have settled on a decking design. For more on the different deck board arrangements, head back to our planning article.

Read How to plan your decking

And don't worry if there are any existing features (such as trees or posts) that you can't, or don't want to remove - just work around them. Include a bit more sub-structure to frame the obstacle and support the deck boards. Block off the area around it by positioning joist off-cuts between the inner joists (secured either end with two coach screws). Then simply cut and fix the deck boards to fit around it.

If it is a tree, leave enough space for its trunk to thicken and for it to sway in the wind. And be sure to swot up on what species it is, as some can be very fast growing.

Cut the outer joists of the sub-frame to length, remembering to allow for overlapping corner joints.

Coat the cut ends with an end grain preserver using a brush.

If you're not fixing to a wall, fix the joists to all the corner posts as per the following steps. 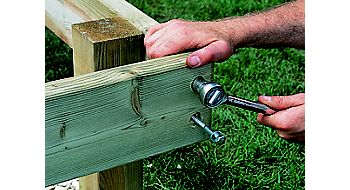 Fix the side joists to the off-set corner posts, first checking that they are level. They need to protrude by the width of a deck post to allow for a balustrade (or railing posts) to be fixed into place within the frame.

Drill holes through the joist into the post and countersink the heads using a flat wood drill bit to create the recess to house the screw heads. Attach with two coach screws using a socket set with ratchet handle.

Recess and drive in two more coach screws at the corner to join the outer joists together (as shown).

Continue round the deck fixing the joists to each post with two countersunk coach screws. 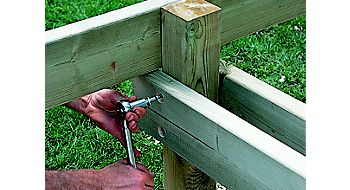 To give extra strength to the sub-frame, screw two support beams onto every second post along the length of the deck. Position them immediately beneath the joists of the sub-frame. 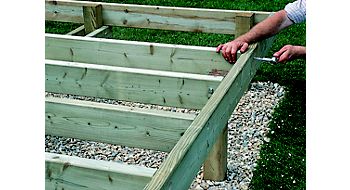 Cut the inner joists to length and attach to the joist sub-frame with two countersunk coach screws at either end, or to the wall joist using joist hangers.

If you're laying timber deck boards in a horizontal pattern, the distance between the centre of one joist and the centre of the next should be a maximum of 450mm. For diagonally laid timber boards, the centres should measure 300mm.

If you find that any of your joists bow slightly, fix them with the bow projecting upwards. Even if you don’t notice an obvious bowing, check the joists are level with the sub-frame using a straightedge. If necessary plane any excess to ensure the deck boards will lie flat.

How to add a balustrade to a raised deck

It's important to attach balustrades (or railings) to a deck after you've built the sub-frame, but before you lay the deck boards. This is because the decking posts slot in and are fixed to the corner posts, and then the deck boards fit around them.

We're going to run through attaching: 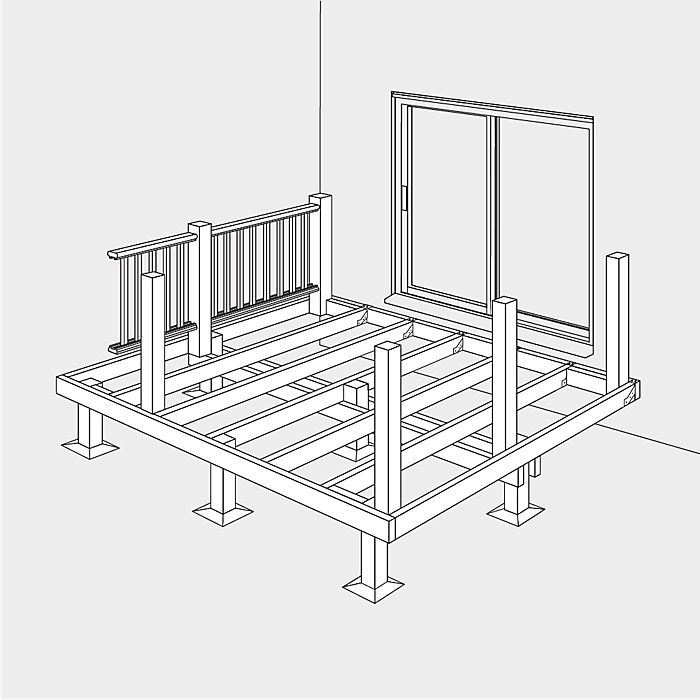 But there are plenty of other options. Instead of spindles, opt for a balustrade screen. Finish your decking posts with post caps or ball tops. Add a gate to keep young children and pets safe in one place. Or keep things simple with a complete railings kit. For more on these, and other, decking accessories, check out our decking buyer's guide.

Read our Buyer's guide to decking

Work out how high you would like the balustrade to be. Cut the wooden spindles down to size if necessary, bearing in mind all safety considerations and Building Regulation requirements.

And don’t forget to allow space beneath the base rail for the deck boards.

How to lay boards for a raised deck

When the railings are in place, you're ready to lay your deck boards. Remember that they need to run in the opposite direction to the joists.

For help on cutting deck boards, head to the 'How to cut deck boards' section of our article 'How to build a basic, ground-level deck'.

Read How to build a basic, ground-level deck

How to add decking steps

A basic open stair is all that’s necessary on a low deck, but for higher ones you’ll need handrails. Be sure to check the most up-to-date Building Regulations.

The easiest way to build steps is to buy pre-formed kits that include two stair risers (side panels) and step treads. They're available in three, four and six step options.

Alternatively, build your own with two risers (side panels) and as many separate step treads as you require. We're going to take you through this process for timber deck boards. If looking to lay solid composite decking steps, follow steps one and two below and then jump to the section 'How to fit solid composite stair treads'. 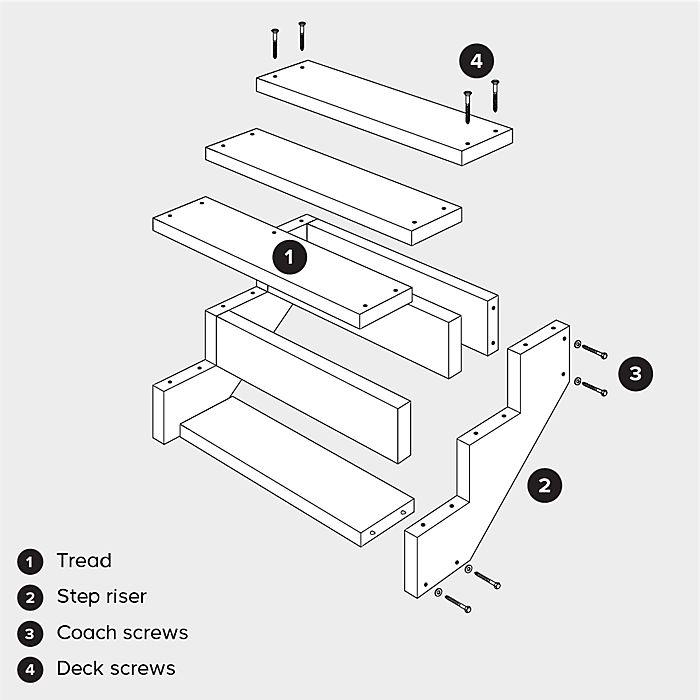 If building your own steps, we suggest:

Consider using a layered surface deck board, such as the Walksure or Grassedeck deck boards, for your steps. The extra layer improves the grip, making it a safer step.

Solid composite deck boards are narrower than timber deck treads, and so two are required to be fitted width to width to provide a comfortably deep stair tread. 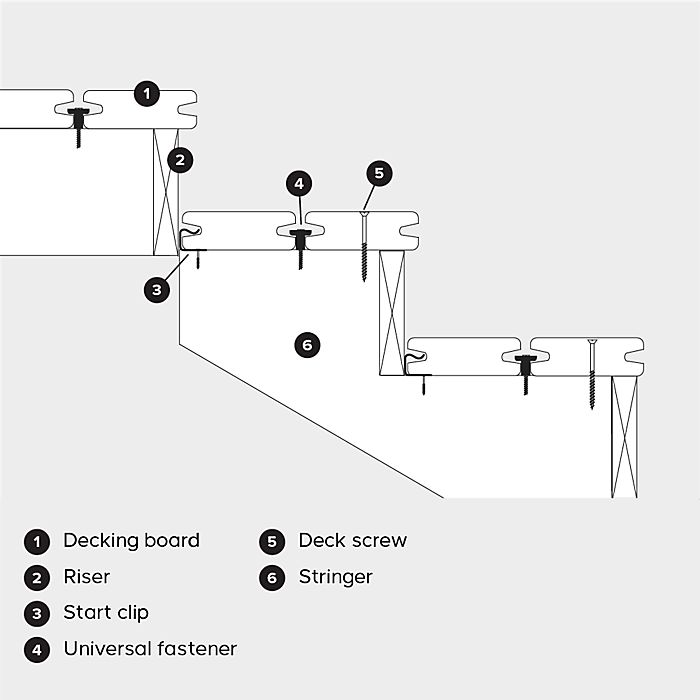 Follow steps one and two of 'How to add decking steps' before starting step one below.

How to fit a handrail to steps 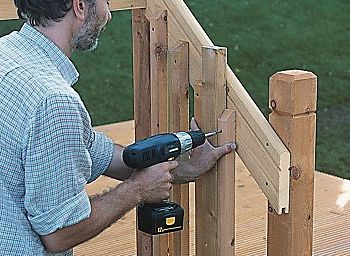 In order to fit handrails to your steps, you’ll first need to fix notched deck posts at the top and bottom. Notched (or rebated) deck posts have had a section of the post removed in order that it butts up to the steps better.

How to fit skirting panels beneath a raised deck

You can add decorative skirting to the exposed space beneath a raised deck by fitting lattice panels.

This can be a practical feature as well, hiding away anything you wish to store beneath your decking and preventing small children and pets from wandering underneath. We're also attaching a wire mesh behind the lattice in our step-by-step advice below, as this helps prevent garden debris and animals from getting under the deck.

If you need access, consider hinging or a different fixing to be able to easily remove the panels.