How to grow potatoes

It's easy to produce delicious crops of home-grown spuds

There truly is nothing better than a potato dug fresh from the garden; it beats anything you can buy from the supermarket on taste and texture every time. It is also one of the easiest of things to grow and can be done in containers or in the ground, so anyone can do it, whatever your garden size.

Best time to plant: March - May 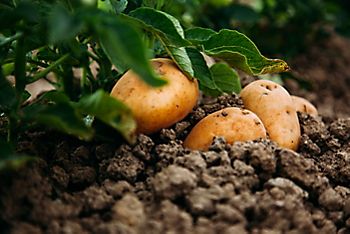 Seed potato varieties are divided in to categories: First Early, Second Early or Main Crop. This really only dictates when the best time to harvest that particular variety is, but it’s also useful for knowing when to start preparing.

If you buy varieties from each category, you could have fresh potatoes right through from May until October. 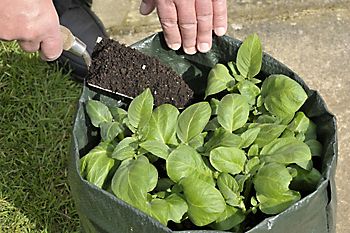 First earlies are the first varieties to be harvested. This is usually about 3 months after planting, once the plants are starting to flower. First earlies are the best choice for container growing, as they produce lots of smaller potatoes quickly and will require less maintenance than main crop varieties.

It is best to ‘chit’ first earlies, but we’ll come back to that later on. They can be planted from February onwards. 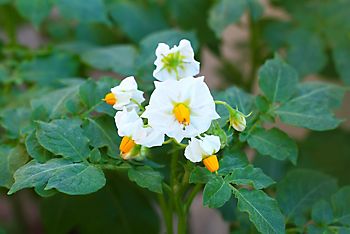 Main crop potatoes can be left in the ground for much longer, until the foliage has died back.

Because main crops are left to grow for longer, they produce much larger potatoes, hence why they are best for growing in the ground. You shouldn’t need to chit main crop varieties unless the ground is still cold from April onwards. 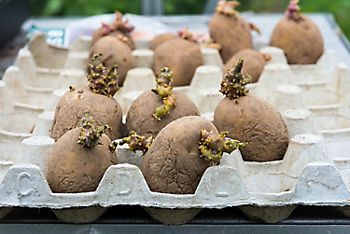 Chitting is the process by which you allow a seed potato to start sprouting before you plant it out. The benefit of this is to give them a longer growing period by starting them off before they are in the soil.

Chitting is a very simple process, whereby you lay out your seed potatoes in egg boxes or shallow trays, and place them somewhere light and frost-free for 5-6 weeks, or once the shoots are 2-3cm long.

How to plant potatoes in the ground

If you’ve got an allotment or veg patch, it’s important to prepare the soil well to get the best out of your crop.

Start by removing any weeds from the area, then digging the soil thoroughly and incorporating plenty of organic matter, such as well-rotted manure. A good few handfuls of fertiliser will also help to provide nutrients for your plants.

Once you’ve dug over thoroughly, use a spade or hoe to drill trenches that are 10-15cm deep, with each trench, 60-70cm apart.

Place tubers along the trench, at least 25cm apart from each other, with most of the sprouts facing upwards.

Use your spade to gently pull back the soil on top of the potatoes. 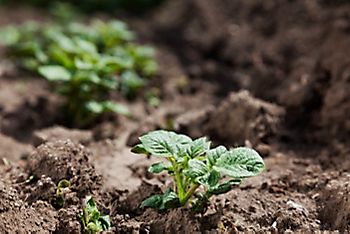 This process not only protects newly emerging shoots from cold weather, it also encourages longer growth on the underground stems that produce potatoes; therefore, more potatoes.

It’s a simple process which involves drawing the soil around the emerging stems. This should be done every couple of weeks, 2 or 3 times, until each row of potatoes becomes a ridge.

Growing potatoes in containers is great for those who are short on space, or for those who have never grown them before and simply want to have a go.

How to plant potatoes in containers

You’ll find gardeners are pretty creative when making use of their space, growing them in anything from potato grow-bags and sacks, to dustbins or polythene-lined stacked tyres. Whatever you decide, ensure there is good drainage in the bottom, and whatever you choose is relatively stable and sturdy.

Start by laying about 15cm of good quality compost on the bottom. You can mix in some well-rotted farmyard manure if you wish – this will help to retain moisture and boost the nutrients.

Lay your chitted seed potatoes on top of the compost and add another 15cm of compost, and water well.

After a couple of weeks, you should start to see shoots emerging from the top of the compost. As this happens, keep adding more compost around the shoots until there’s about 7-10cm left at the top of the container. It is vital to keep watering container-grown seed potatoes and they should never be allowed to dry out.

A 40x40cm container is adequate for 3 seed potatoes to have enough space.

How to harvest potatoes

As a rule of thumb, first and second earlies can be harvested anytime from when they start flowering to when they stop flowering; however, the youngest potatoes are always the most delicious. 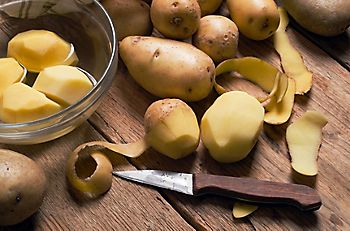 Main crops can be left in the ground for much longer and are harvested anytime from when the foliage starts to yellow and die back.

The most delicious potatoes are dug freshly from the soil, so unless you are growing main crops for storing, it’s best to harvest for your daily requirements.

Container-grown potatoes can either be overturned harvest all at once, or if the compost is soft enough, plunge your hand in to feel around for potatoes.