How to understand a central heating system

In a central heating system, heat is produced from a single source (usually a boiler) and distributed through the house as either hot water or hot air. Most homes have central heating systems, and while you do need a qualified professional to install them, there's a lot you can do to maintain them yourself, if you understand the basic principles.

In a wet central heating system a boiler heats the water, which is usually pumped around a circuit of pipes to radiators throughout the house. Each radiator has valves that control the rate at which the water flows through them, this controls the amount of time the water spends in the radiator - and the amount of heat that's given off. When the water leaves the radiator, it's piped back to the boiler to be re-heated.

Although some heat is lost from the pipes as the water flows around the system, their narrow diameter and the speed of the flow keeps this to a minimum. A well-designed system might have a number of short circuits radiating from the pump rather than one large one, which ensures the last radiator on each circuit heats up just as efficiently as the first.

The radiator circuits in most modern wet central heating systems are made from standard 15mm copper pipe, while the pipes that link the boiler, pump and points where the circuits split off will be 22mm or 28mm in diameter. Soldered capillary joints are best (apart from connections to the boiler, pump and valves), as these are least likely to leak. Plastic pipes have also been developed for use in wet central heating systems, but you can't connect these directly to a boiler. You'll need to use a short length of copper pipe instead. 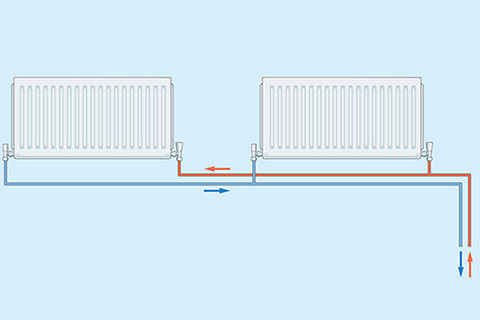 More modern systems have a two-pipe layout, where hot water is carried from the pump to the inlet valve of each radiator by a flow pipe, which terminates at the last radiator on the circuit. A second pipe (called the 'return pipe') collects the cooled water from the radiators and carries it back to the boiler for re-heating. In the older single-pipe layout, the hot water passes through one radiator and is then returned to the flow pipe to be carried on to the next, and so on around the circuit - losing some of its heat each time. As a result, the radiators located near the end of the circuit need to be bigger to give off the same amount of heat. 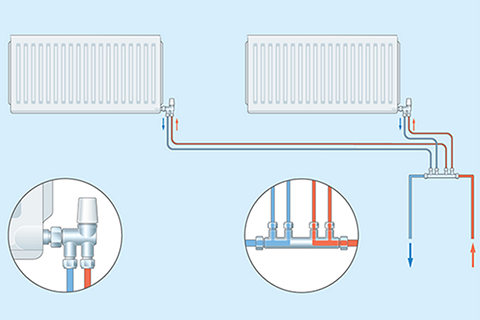 A variation of the two-pipe layout uses small-diameter microbore pipe, which you can get in 8mm and 10mm sizes. This comes in coils and is very easy to bend, so you can feed the pipe through cavities and around corners without the need for joints. As these narrow pipes only carry enough water to heat one radiator at a time, each radiator needs its own circuit. These radiate out from fittings called manifolds. The flow pipes are connected to one end of the manifold in a number of radiators, and then return to the other end. But both the feed and return microbore pipes are connected to the same end of the radiator.

In a dry central heating system, air is warmed by a single heat source and blown through a series of large ducts to heat the rooms of the house. Each duct terminates in a floor or wall grille, which you can open and close to control the heat levels. Some systems rely on an electric storage heater to warm the air, while others use a fuel such as gas. You can use overnight off-peak electricity to heat firebricks in an electric storage heater, and then use their stored heat to warm the house during the day.

Depending on the type of a heater, some systems can also provide hot water. But this type of system can only be installed when a house is being built, as the bulky ducts need to be incorporated into the structure to stop them being too obtrusive.

Although not strictly classified as 'central heating', there are other dry systems that can heat a whole house. These include individual room storage heaters, which use off-peak electricity to heat firebricks that give off heat during the day.

Another option is underfloor heating, where hot water pipes or electric elements are laid under the floors. These produce enough heat to warm the air of the room without making the floor uncomfortable to walk on.

A wet central heating system delivers its heat by radiation and convection. You can feel radiation as heat that's emitted from a hot surface, but convection warms the air and, in doing so, sets up a gentle circulation centred on the heat source. The warm air rises, cooler air flows in to take its place and the temperature of the whole room rises gradually.

The simplest form of heat emitter is the panel radiator. Although it's called a radiator, over half of its heat is created by convection. It has a corrugated body to increase its surface area and ensure the maximum heat output. If you're short of space, double-panel radiators are ideal. Another way to boost heat output is to use a convector radiator, which has a number of fins on the back to increase convection.

Radiators normally have a threaded hole (or 'tapping') at each corner. The bottom two are for the valves: a manual (or 'control') valve to adjust the incoming flow of water (used to turn the radiator on and off), and a lockshield valve to control the outgoing flow of water (normally left fully open). One of the top tappings will be fitted with a bleed valve - a simple tapered screw that allows you to remove air from the system. The other has a blanking plug.

The more you can programme and control your heating system, the more energy-efficient and economical it'll be to run. 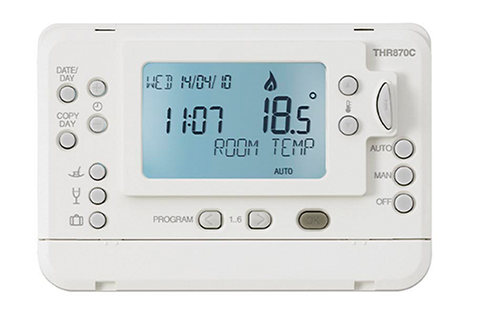 Many systems incorporate a room thermostat (or 'room stat'), which switches the heating on and off according to the temperature you've chosen. It's normally put in the living room or hall, and it operates on the assumption that a rise or drop in temperature in its vicinity will be matched by a corresponding rise or drop throughout the house. A programmable room stat gives you greater control, enabling you to set different temperatures for different times of the day. These are available in wired or wireless versions. The problem with a room stat is that it doesn't accommodate local temperature variations, perhaps caused by the sun shining through windows or by an open fire in a living room.

You can reduce the heat output of your individual radiators by closing a manual valve. But it's much more efficient to install thermostatic valves, which do this automatically for you and then open again when the room temperature drops. Even better are programmable thermostatic radiator valves, which maintain the desired temperature of individual radiators at set times of the day.

Radiators and towel warmers needn't just be functional heat providers. These days there are lots of stylish options to complement every interior. 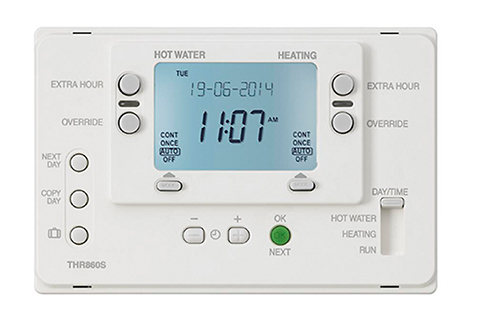 A simple time switch will turn the system on and off at pre-set times, but a programmer lets you operate your heating and hot water circuits independently at different times of the day. A controller gives you even more flexibility. This operates the system at set times and also responds to temperature fluctuations, while a boiler manager ensures that the boiler only runs when necessary by sensing a variety of conditions - including outdoor temperature.

The temperature of water needed to heat radiators is much higher than that at the taps (82°C as opposed to 60°C), and a cylinder thermostat will stop the hot water supply from overheating. When the temperature in the cylinder reaches the set limit, the thermostat operates a motorised valve and shuts off the flow to its heat exchanger. When the water temperature drops, the valve opens again.

Motorised valves (known as 'zone' or 'mid-position valves') can also be used to shut off parts of the system at specific times of the day when heating isn't needed in some rooms. This can be useful in a large house, where you might not want to heat all the bedrooms on upper floors during the day. It's a requirement in systems heating more than 150m2. 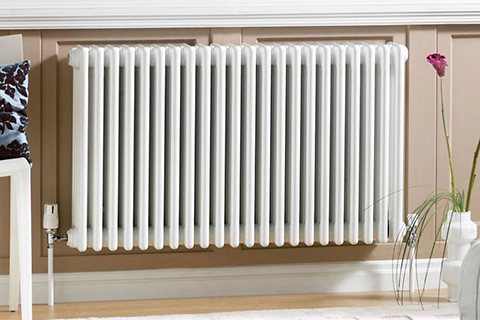 How to replace a radiator

Remove and replace radiators that aren’t working properly and as well as saving you energy, it will ensure that your home is being heated efficiently. 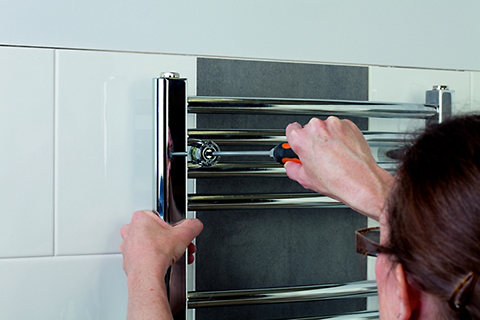 How to fit a new towel radiator

A towel radiator is a luxurious addition to your bathroom. 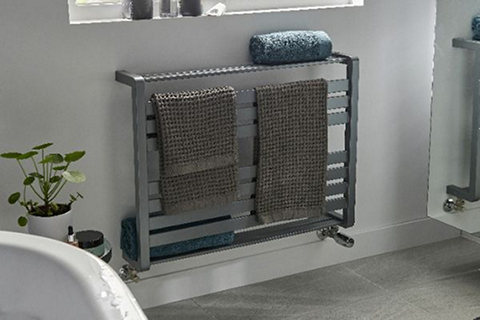 Stepping out of the shower or bath into a warm towel or robe is one of life’s little luxuries. 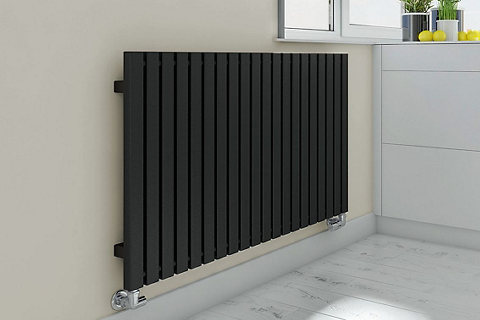 If you need a new radiator, but you're not sure where to start, our FAQs will run through the important information you need to make the best choice for your home.