How to clear blocked pipes

Waste pipes and traps are a vital part of your home's drainage system. Most modern systems use plastic pipes and fittings. If your sink, basin or bath is draining slowly, try to fix it straight away. If you don't, it might become more difficult to fix.

Another important difference is that waste pipes must slope downwards at the rate of at least 20mm in every metre to ensure the water runs away freely. In the past they were made of lead, but modern systems are just made of plastic. Depending on the type of plastic used, the pipes can be joined by simple push-fit connectors that contain rubber ring seals, by compression-type connectors with rubber 'olives', or by solvent welding - using specially formulated solvent cement that softens the plastic and dries to form a strong, watertight joint.

Cut plastic waste pipes with a hacksaw, then remove the burrs inside and out with a half-round file before you fix them. Solvent-weld fittings are neat but permanent - so while they're ideal on visible pipework, it's better to use compression fittings under and behind your sinks so you can take them apart again for cleaning and unblocking. When you run pipes along an interior or exterior wall, it's a good idea to hold them in place with waste pipe clips - which you can get in lots of different colours and sizes. Use wall plugs and screws to attach the clips to a masonry wall, or hollow-wall fixings on plasterboard. Don't forget to check for hidden pipes and cables before you drill. 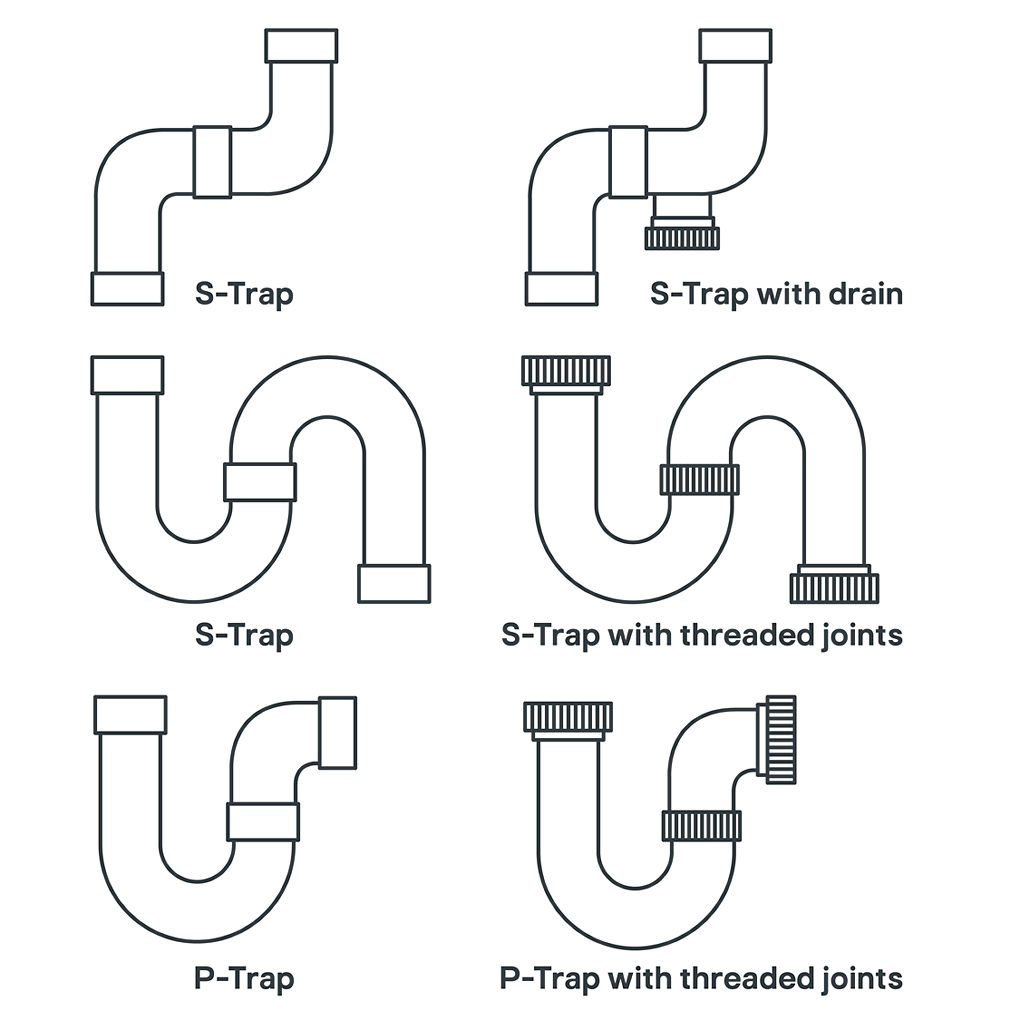 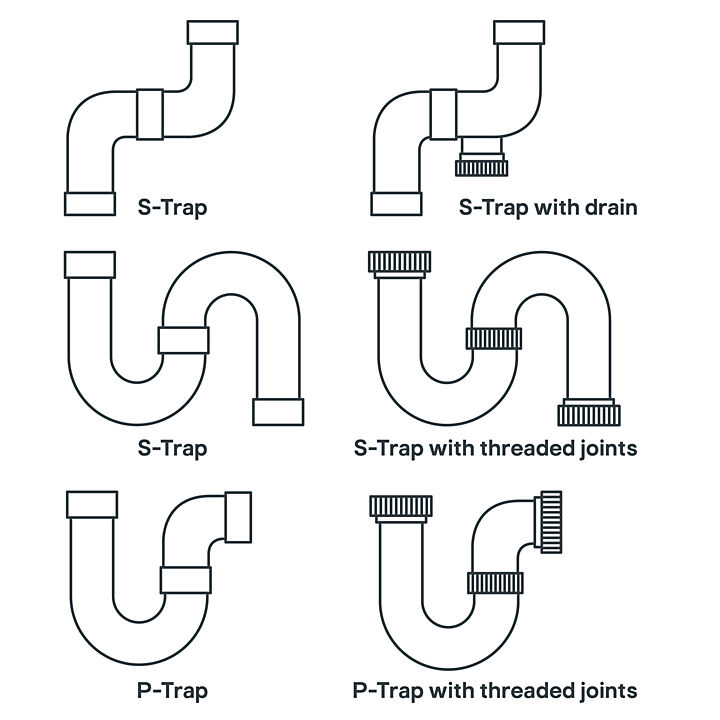 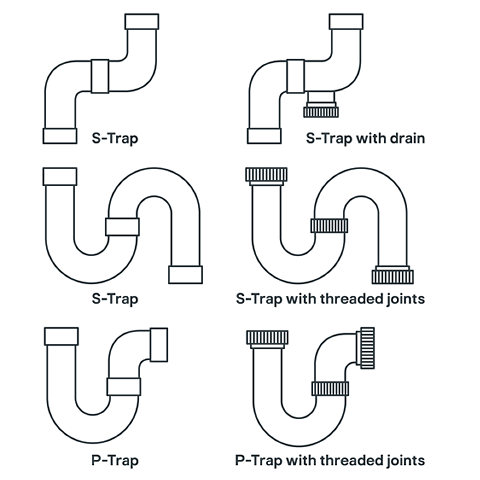 Traps are a very important part of your drainage system. They're water seals that stop drain smells from getting into your home through the waste outlets of your sinks, basins and toilets.

Every plumbing installation that discharges waste water into the drainage system is fitted with a trap, or incorporates one in its design. Essentially, a trap is a U-shaped loop of pipe directly below a waste outlet. Whenever you pull out a plug or flush a toilet, a small amount of water stays in the trap, which creates a seal.

Made from plastic, traps come in a variety of designs to suit different uses. The most common is the P-trap (so called because of its profile) which has a horizontal outlet. Special shallow versions fit beneath baths and shower trays, which can have a 50mm water seal (unlike sinks and basins, which must have a 75mm water seal). Then there's the S-trap, which has a vertical outlet. There's also the bottle trap - a compact device that's used in places where the trap is exposed (such as under a hand basin). However, it's more likely to get blocked than P- and S-traps.

Some bath traps provide a connection for an overflow pipe, and there are traps with connectors or standpipes for washing machines. Toilet pans and bidets have integral traps. Early lead U-bend traps included a threaded access plug at the bottom, which could be removed to clear blockages. But modern plastic traps can be dismantled by unscrewing the cap nuts that hold them together. This not only lets you clean the trap completely, but also gives you access to the waste pipe if a blockage happens.

If your sink, basin or bath becomes slow to drain (or stops draining completely) there's probably a blockage somewhere in your waste pipe. Common causes are grease in the trap, or fibres caught below the grid on the plug-hole. If the water doesn't drain away at all, you've got a complete blockage - which means there must be an obstruction in the waste pipe. You can try a range of methods to sort this out. 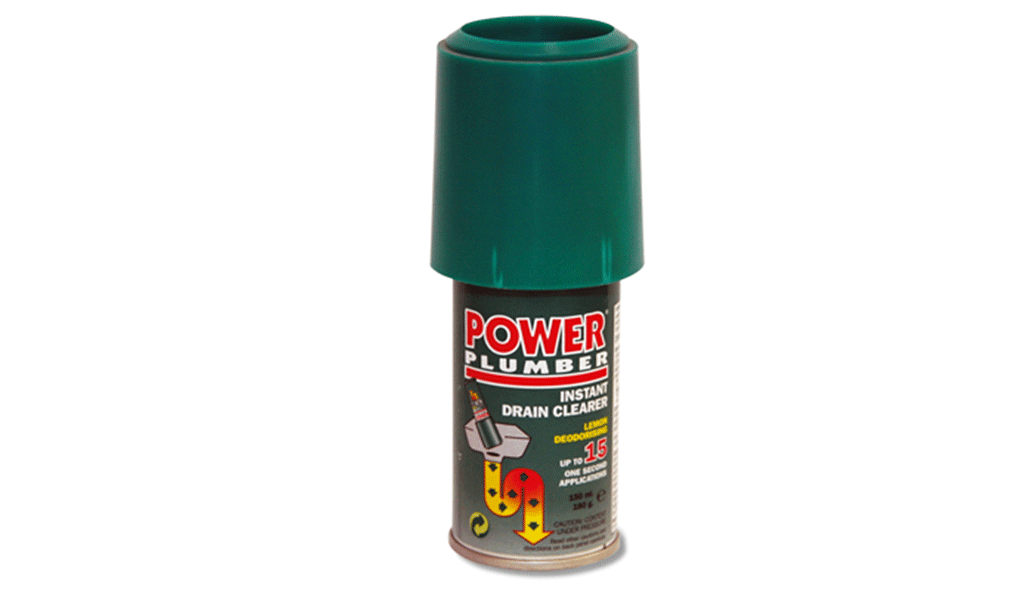 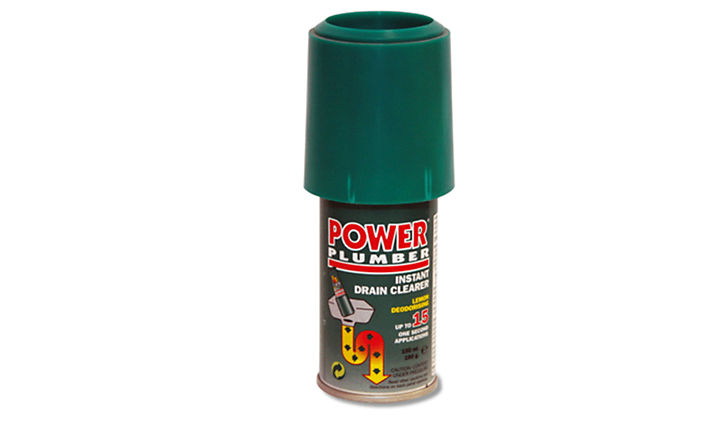 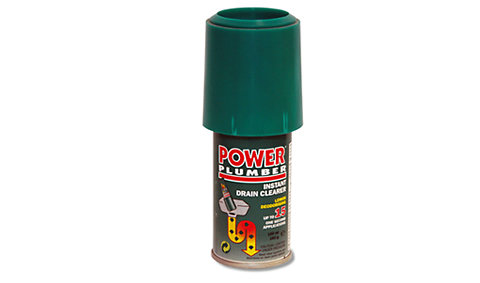 Instead of harmful chemicals, this drain unblocker uses a gas that expands when it comes into contact with water. This generates a strong turbulence that clears drains up to 20 metres away by agitation, rather than pressure. It'll remove blockages caused by hair, soap build-up, paper, grease and food particles in seconds. You can use it on blocked or slow-flowing sinks, basins, baths or shower trays. And with the optional plunger head, it can even clear blocked and slow-flowing toilets. 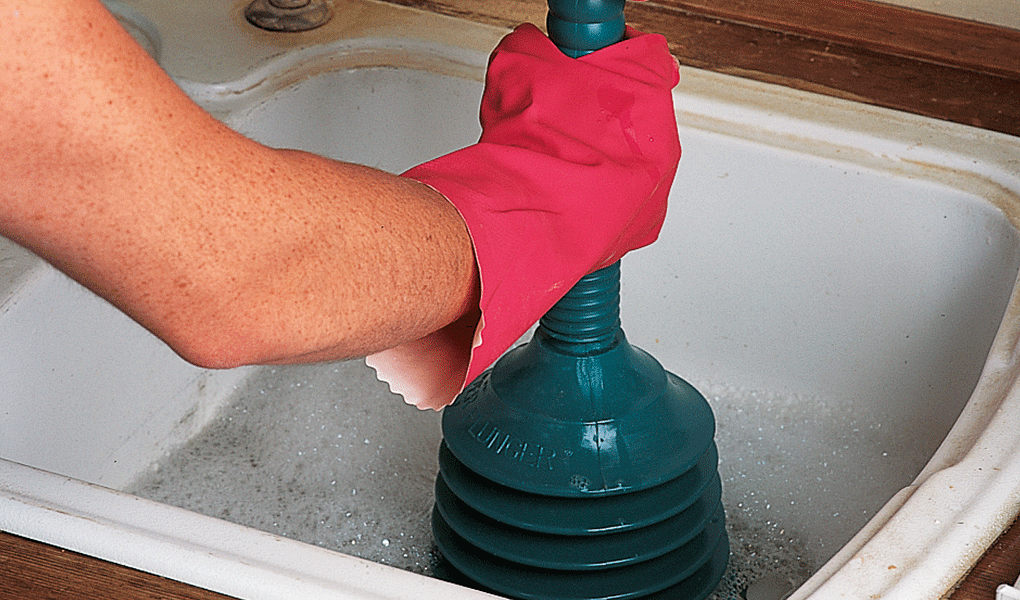 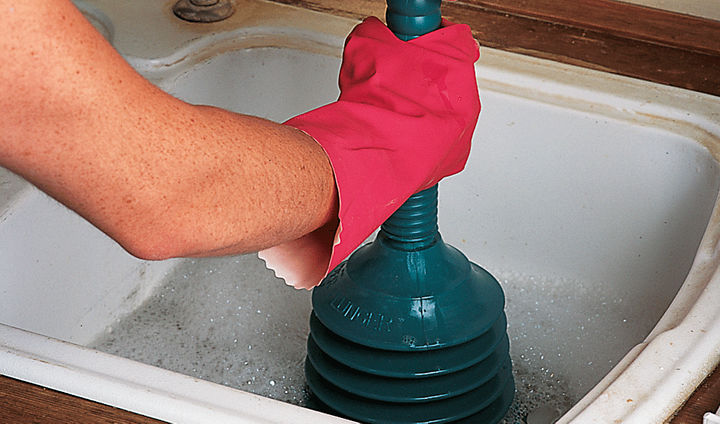 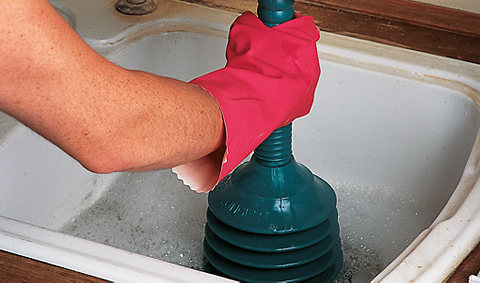 If your sink is completely blocked, partially fill it with water and place the cup of a sink plunger over the plug-hole. Stuff a damp cloth into the overflow to prevent any loss of pressure. Then pump the plunger up and down vigorously. Take the plunger away and see if the water now drains. You may need to do this a couple of times. 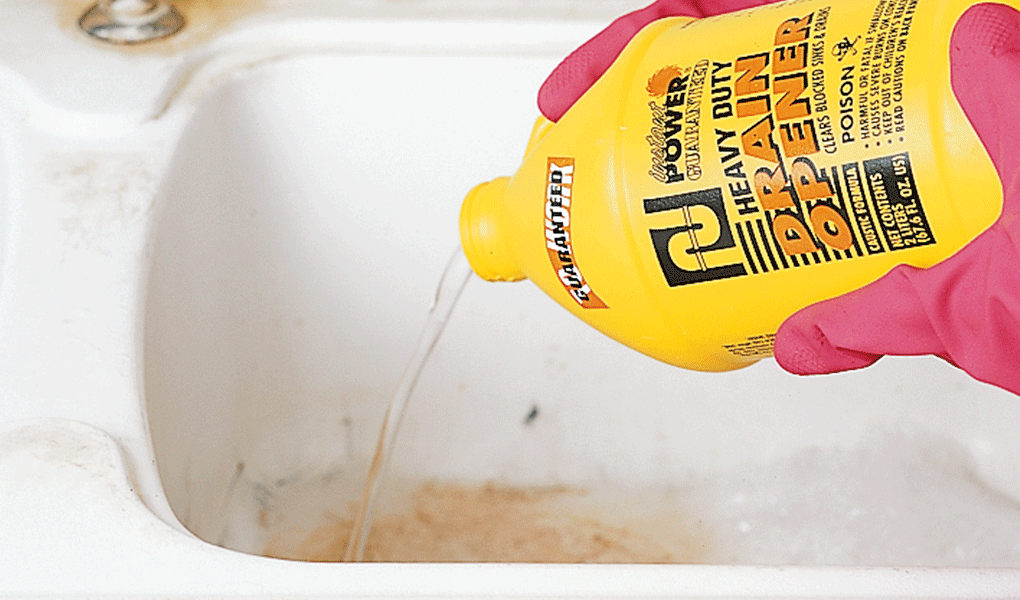 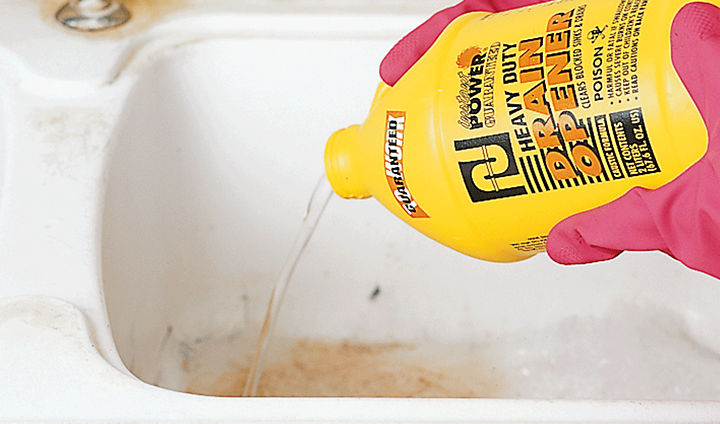 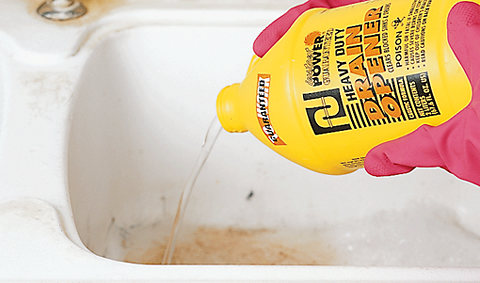 If that fails, try using a chemical drain cleaning product. Put on some protective gloves and goggles, and make sure you follow the instructions carefully as the cleaner is very toxic. Don't use it around other chemicals such as bleach, as this could release dangerous gases. It's also a good idea to spread some petroleum jelly around the rim of the plug-hole to protect it from damage. 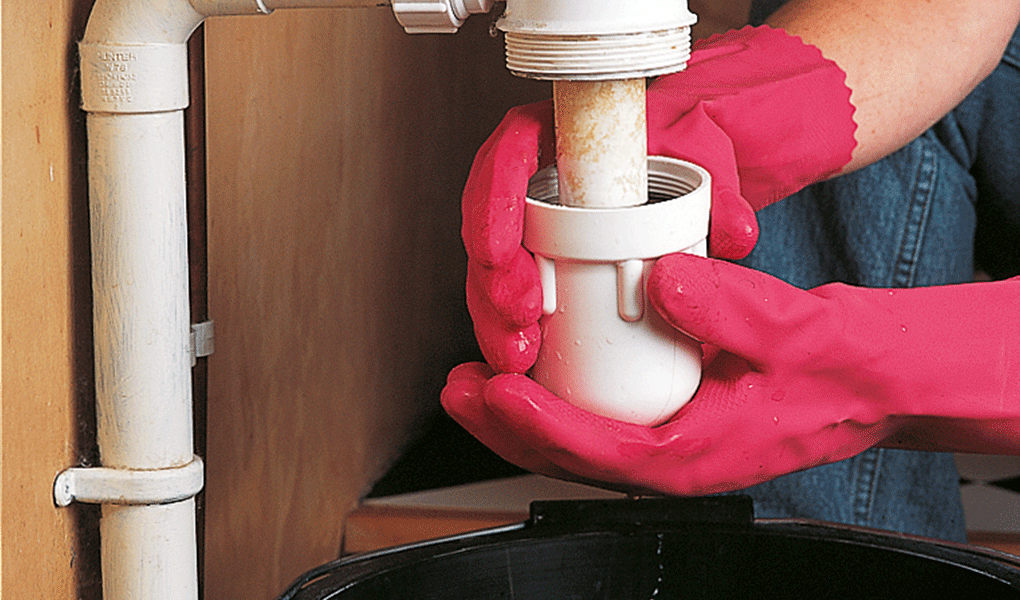 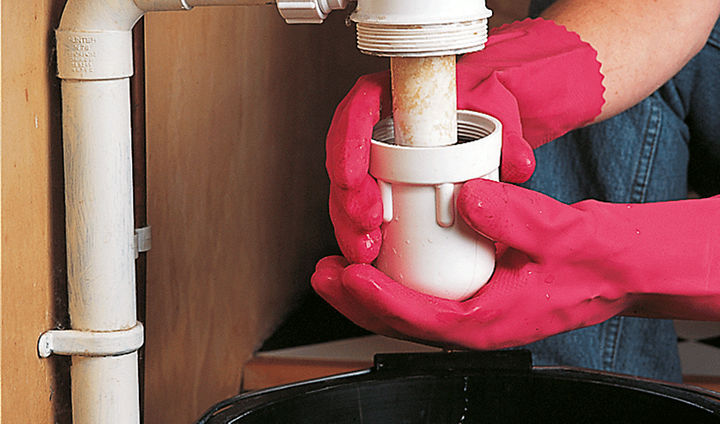 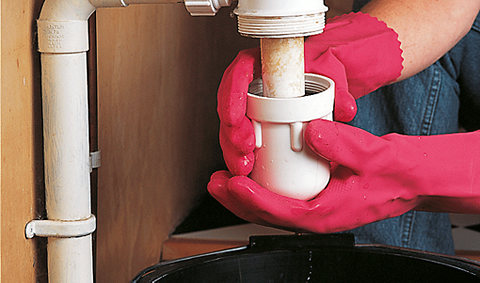 If the blockage still hasn't cleared, you'll have to remove the waste trap. Put a bucket under it to catch any spillage, then unscrew the trap and empty the contents into the bucket. Put the trap back together, making sure you replace any washers or O-rings. But don't over-tighten it, as it'll be difficult to undo in the future. If there wasn't anything blocking the waste trap, use a drain auger to probe into the waste pipe.

When you've got a blocked toilet pan, the water rises almost to the rim when you flush, and then drains away very slowly. If the blockage isn't in the pan outlet, there could be a problem in the main drainage system.

Try pouring a bucket of warm water into the pan from a height. This often clears a minor blockage.

Place a large toilet plunger over the pan outlet and pump the handle up and down.

If that doesn't shift it, use an auger designed for a toilet. Its probe extends around the U-bend and rotates as you turn the handle, removing the blockage. But make sure you put on protective gloves and read the manufacturer's instructions before you do this. 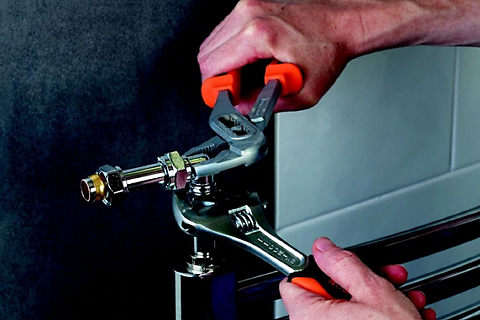 How to connect pipes & fittings

Pipes and fittings vary by home and by length, shapes and connectors. 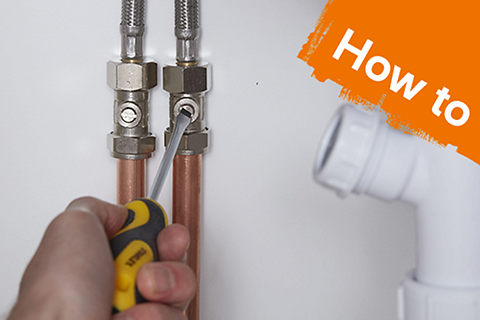 How to deal with plumbing problems

Water can cause serious damage to your home, so acting quickly is essential if a problem occurs in the plumbing system. 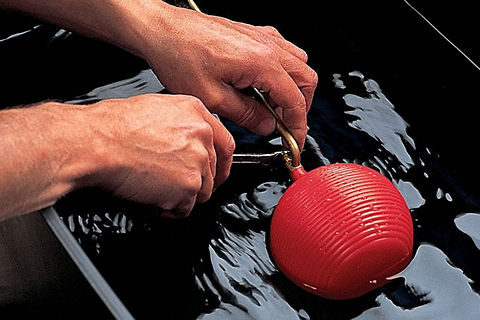 How to understand a plumbing & heating system

Your home's cold and hot water supply systems will largely be out of sight, with the pipes concealed in walls and under floors. 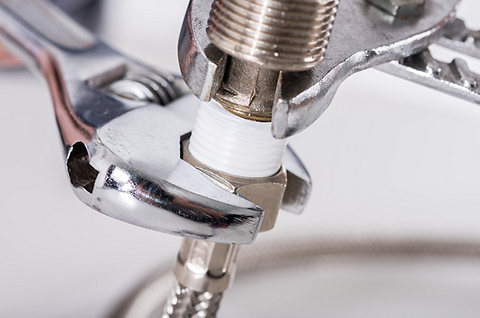 How to cut, clean and replace pipework

Taking care of the pipework in and around your home and being able to maintain it will help to reduce your risk of leaks.