Farrow & Ball has long been known for its luxurious paint finishes and characterful colour names, all created at the British brand's home in Dorset. This September Farrow & Ball is adding 11 new exciting colours to its signature palette in both sample pots and 2.5 litre sizes.

From deep enticing blues and vibrant greens to charming and delicate pinks, the new colours will inspire and delight you as we showcase these beautiful new shades below.

The deep blue tones of Wine Dark (No.308) give an atmospheric and enticing feel to any room.

After 75 years in the business, it goes without saying that Farrow & Ball can teach us a thing or two about colour. Its versatile signature palette of 132 colours offers combinations to suit all kinds of homes and personal styles without overwhelming prospective painters, and ranges from subtle neutrals to bold brights and deep, dramatic shades.

Of course, no mention of Farrow & Ball would be complete without a nod to its famous colour names. The 11 inspiring new colours for Autumn 2022 include the light, delicate pink of Tailor Tack,  which takes its name from the colour of tacking thread used in Haute Couture ateliers, Whirlybird, a playful green inspired by the papery winged seeds beloved by many young gardeners and nature lovers, and the luxurious, deep midnight blue of Wine Dark.

Each shade has its own story, told below, inspired by everything from the brand’s Dorset roots to beloved members of the Farrow & Ball team.

Stirabout is inspired by the nurturing porridge favoured over many centuries in Ireland. It's an earthy tone with just a hint of underlying grey to create a relaxed feel that will never be too cold. Try pairing it with Jitney and natural fabrics for a laidback look.

The name 'Eddy' comes from the circular currents enjoyed by wild swimmers as a natural jacuzzi. Delicate without being pastel, it's a gentle green with a fresh feel that brings the outdoors in. It works particularly well in garden rooms and relaxing spaces.

Tailor Tack is a light, delicate pink, which takes its name from the colour of tacking thread used in Haute Couture ateliers. It looks particularly good paired with vintage finds or industrial accents, so works well in traditional and modern schemes. Try it on a ceiling for a subtle touch of colour.

Templeton Pink was developed for the dining room at Templeton House to offset the magnificent Wedgwood plaques made to commemorate a former owner. It's a more intense version of Setting Plaster and becomes surprisingly deep in low light, creating a warm and welcoming space.

Before becoming the name of this fiery red, the word 'bamboozle' was originally used to describe the deceit of pirates. It's a little less spicy than Harissa, a little more sophisticated than Charlotte's Locks and brings joy and warmth to any room. Try it with other strong colours like Beverly or Wine Dark for a bold scheme.

Hopper Head takes its name from the decorative iron containers used to catch rainwater. A classic charcoal that sits between Railings and Down Pipe, it creates inviting spaces to withdraw to. It pairs beautifully with nearly every other Farrow & Ball shade or adds a touch of drama when used exclusively across the walls, ceiling and woodwork of a room.

Selvedge is a dependable blue, named after the highly prized denim woven on a shuttle loom to produce closed edges. It's particularly good in low-light spaces where it creates a familiar and friendly atmosphere, perfect for bedrooms. Try it as a lighter, less grey version of Farrow & Ball classic De Nimes.

Kittiwake is a clean, cool blue inspired by the wings of seabirds. It sits between two famous Farrow & Ball blues, Parma Grey and Lulworth Blue, but has a warmer, more relaxed feel. It works especially well with stainless steel and industrial accents, making it a winning choice for contemporary kitchens.

Wine Dark is a deep blue as rich as the story behind its name - the term was used by Homer to describe the sea, a choice readers have discussed at length. The hue of midnight skies, it's the richest of the Farrow & Ball blues. In low-light, Wine Dark becomes even deeper and almost velvety, making it particularly glamorous in candlelight. Try it in a dining room or cosy sitting room for an intimate space.

Whirlybird is a playful green inspired by the papery winged seeds beloved by many young gardeners and nature lovers. It's an upbeat and lively shade, particularly in morning light. Pair it with Beverly and James White for a light-hearted scheme.

Beverly is named in honour of a much-missed Farrow & Ball staff member. Like its namesake, this green is dependable and reassuring. It's bound to be a favourite among lovers of colour. With a remarkable ability to feel even greener in bright daylight or more conservative in lower light, it can work beautifully in any home.

Every Farrow & Ball tin is filled to the brim with high-quality ingredients in generous quantities, including rich pigments, tough binders and resins, and a low-odour water base. Together, these help to create the rich depth of colour and unique response to light that Farrow & Ball paint is known for, as well as making it easy to apply for a beautifully even result.

Every colour and finish is carefully crafted at the Farrow & Ball factory in Dorset, the county the brand has called home since 1946. Here, its expert artisans and chemists ensure that every batch meets exacting standards of quality and colour accuracy before it’s sent to your local B&Q store or direct to you at home.

The charming pale pink of Tailor Tack (No.302) is delicately beautiful in both modern and traditional spaces.

The whole Farrow & Ball range, including the hard-working trim finishes, is 100% water based and has been since 2010. This means Farrow & Ball paint contains low levels of air-polluting compounds called VOCs, one of the culprits behind the strong-smelling fumes we associate with traditional paints. This makes it more comfortable to apply and easier to live with immediately after painting. It’s even earned an A+ score for indoor air quality.

The paint’s water base also allows for quick drying times and makes it even easier to clean  brushes and rollers just with warm, soapy water. DIYers with little ones will also be pleased to know that the Estate and Modern paint ranges have been independently tested and approved to meet Toy Safety Standards,* making them safe for use on nursery walls, cots, and even toys.

Deep and rich, with luxurious tones, Bamboozle (No. 304) has a daring and fiery feel.
The bright and lively green of Whirlybird (No.309) is vibrant and playful. 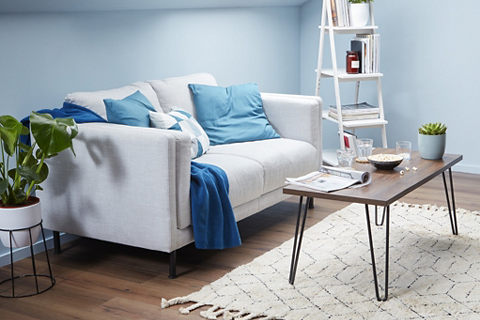 It can be easy to get overwhelmed with the different types of paints available. But by choosing the right features for the right room, you can end up with the perfect finish that lasts longer. 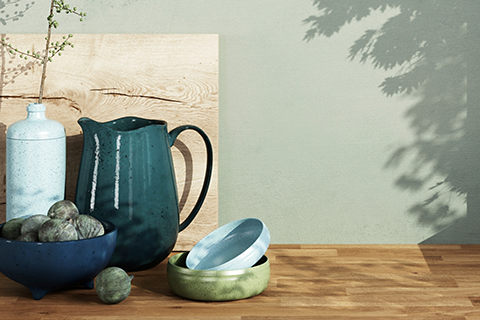 A fresh lick of paint can totally transform your indoors. We'll help you choose the right colour paint in the right finish for your next home makeover project. 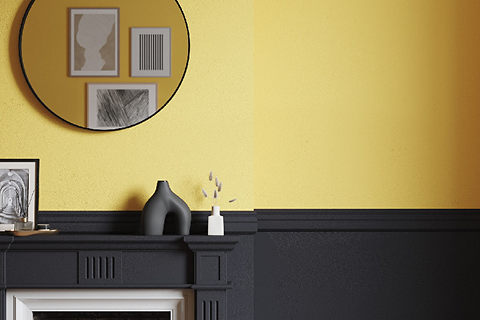 Get creative with paint

Embrace your inner artist with techniques that are easy to recreate. From ombre to geometric, you don’t need to be an expert to fill your home with colour.